This post is not about a boat. It's a SHIP. 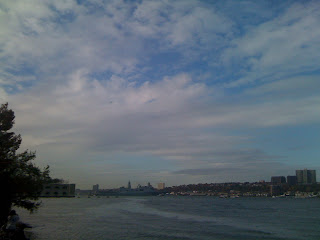 I was intending to fly under the radar, to be one of those coy bloggers who teases about her location periodically without giving it up. Like, first I'd mention that I was in a fairly large, metropolitan area. Then I'd drop some hint that would lead you to suspect the east coast. I'd narrow down that I'm not in the south, then I'd let slip that I'm not in New England, and then months and months maybe years down the road those of you who were paying attention would suss out the exact city.

Well, blog three and I'm letting the cat out of the bag. Something pretty neat happened on my run this morning, and I'm sharing it. Today was the homecoming of the USS New York, an "amphibious transport dock ship" or "amphibious assault vessel" made partly out of steel from the WTC site. I paused to get some pictures - there was a nice little viewing area near a midpoint of my run and a whole flock of gawkers. Helicopters were in abundance, as were really, really large cameras. Although... some of the gawkers were poorly informed. I've since learned that it's decidedly a SHIP, not a boat (someone said to me, "There's a huge, stealth looking boat coming up the river!!"), and that it can hold 361 - NOT 3500 - marines.

Those of you paying close attention will now be able to discern one of my favorite local running routes.
Posted by Tracy at 1:58 PM