Still not dead last... but getting closer...

Well.
Remember a few days ago when I said that "not being dead last" was my motto?
And remember how my plan involved the Empire State Building Run Up today?

Well.
Imagine the range of emotions I felt when I looked at the posted results and saw myself there, dead last for my heat.  It was a little weird - I knew I was slow, but I also knew that there were still people behind me (there were only maybe 80 people in my heat).

Then, a few moments later, I thought to check the age group results to see what the winning times were, and it turns out I was third in my age group!  A meaningless piece of information, since I was running the non-competitive preliminary race (no awards given out).  But still, I take what I can get.  And it soothed the "dead last" sting.  As did the cluster of women next to me who saw the list and started chirping about not seeing their names - because they'd been slower than me.

But back it up, to give a more full race report.

For most of the second half of last night, I was having anxiety dreams.  In my dreams, I was at the top of the building but had no recollection of how I got there.  I had finished the race - I assumed - but I didn't remember it.  When I woke up I found I was actually quite nervous about the race, and (sadly) was not actually done with it despite my vivid dreams.

I got there, got my t-shirt and bib, and checked my bag.  Very chill.  I had struck up a conversation with another woman in the lobby, and we met a friend of hers who turned out to be quite competitive - a Canadian who regularly conquers the CN Tower in around 11 minutes.  That's fast, peeps.

Eventually they corralled us all over to the start, which was kind of confusing.  There wasn't much explanation of where we were going, except that we were moving as a herd.  Everyone was quite friendly.  One man at the start, an older guy, got to telling me about his training plan.  He was really pushing lunges, to the point where I kind of wanted to just say, "Listen.  Stop.  Training is done. It's too late."  To be polite, I asked him if he'd ever done a climb like this before.  "Well, once I did one, but that was downstairs," he said.  "Was that safe?" I asked.  Running downstairs seems very, very dangerous to me.  "Well," he said, "It was the World Trade Center on September 11th."

The gun went off, and our crowd of about 100 people all crammed through one small door.  The stairwell was narrow and very industrial, as I figured it would be.  I had a good idea of what to expect: people going too fast from the get-go, crowds, dry air, heat, dust, etc.  Still, like they say, it was no preparation.  I was swept up in the crowd and was on the 8th floor before I felt like I had any control over my pace.

Even though I'd done some practicing with a metronome, I didn't really know what to anticipate in terms of my finish time.  I secretly hoped for 20 minutes, but I knew that I could only hold the 20 minute pace on a very, very good day - which today wasn't.  Also, I thought it was chip time being counted when it was actually net time.  On top of that, the stairs weren't straight up.  It's hard to describe, but if you picture how most flights of stairs rise in one direction about 9 steps and then double back in the opposite direction 9 steps?  These flights went straight up all 18 steps per flight, followed by a long landing to the next set.  Good in terms of rest in between, but terrible in terms of pacing.  It essentially doubled the area being covered.

Other highlights...  the ESB staff must have all thought we were nuts.  Then again, I thought they were nuts: the first (of many) times I heard "Almost there!!!" was on the 20th floor.  Twenty.  Not even 25% done.  Then, I got "Congratulations!!!" after I'd barely crested the 80th floor - 6 more floors to go!  At the end, there were mini-pastries and bagels and assorted juices.  I was mad psyched, as that's a much better spread than the usual NYRR boxes of bagels.  But my excitement was nearly ruined by a gaggle of women saying things like, "Geez, we didn't even burn enough calories during the race to justify eating one of those things!"

Overall, I finished in about 26 minutes.  Slow, slow, slow, but I did it, I never contemplated stopping, and it was harder than I expected.  Much harder than I expected.  Even though I'd paid some lip service (and 'mill service) to training, I felt unprepared.  Also, I got dizzy and developed a nasty cough.  And yet, I'm not at all sore - I feel like I could give it another go.

Which I hope to, next February.  NYRR, you can expect to see my application coming through next December! 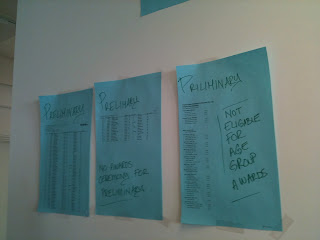 Three spellings of preliminary.  Only one of them is correct.  I expect more from runners!  (Not sure why, but I do.)
Posted by Tracy at 1:12 PM