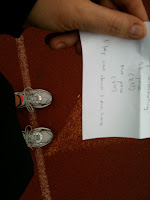 Speedwork, my dear friend!  I'm back in it!  Sort of.  This is the story of a speed workout that almost didn't happen (and wasn't very speedy when it did).
Last night, after yet another impossibly long day of work, I bagged on the gym and had a beer before watching Law and Order and going to bed.  I got the bright idea that I should do some speed work this morning, so I texted my sister for a workout, woke her up, and got the following text:

1 mile warm up, 12 laps of alternating each lap w 5k pace and the next lap marathon pace, 1 mile cool down

You might point out that my sister is not the best person to get track advice from right now, being as she's walking with a limp due to the large blood blister on the bottom of her foot that she got from running on the track barefoot yesterday.  You would be right.  Anyway...
I stumbled out of bed this morning when my alarm went off around 7.  That's not a figure of speech - I literally stumbled because my head was spinning so badly it threw off my balance.  I made it as far as the bathroom before returning to bed for another fitful hour of sleep, after which I was able to get up and move slowly.  Caffeine didn't fix it, ginger didn't fix it, and the only thing that seemed to help was neck rolls and massage.  This is not a common phenomenon for me by any means and I have no idea what caused it, except for a hunch that I slept badly (and I had a sore neck and shoulders).
Still, I hit the track, figuring I would either loosen up while there or still feel sick and head home early, no harm no foul.  It was kind of neither.  Instead, it was a mediocre, off-goal workout during which I felt only sort of off-kilter.
My target paces were 2:27 for the 5k quarters and 2:51 for the marathon splits (using McMillan predictions for my 5k and marathon paces).  Aside from a superfast first two and two rest laps that I walked, I was fairly close.  My splits were: 2:13, 2:35, 2:34, 2:50, 2:31, 4:22, 2:29, 2:48, 2:34, 2:47, 2:32, 4:22.
As much as this was sort of a dead loss, I'm excited to be back on the track.  I need to do this right now to get a feel for the different paces again and to push myself.  Today sucked; not only did I have no clue what the paces should feel like, but my legs were lead and my lungs were heavy and there was a terrific headwind sweeping down one length of the track.  I only got that adrenaline-filled feeling of power once or twice and it was fleeting.  Usually speedwork, even slowly, makes me feel superawesome.
After a long meeting at work tonight, I'm switching to scotch.  And a new pillow.
Posted by T at 2:14 PM