I did not want to run on Tuesday

After staying up until an ungodly hour trying to get a project done, I forgot to unset my alarm.  Even worse, the alarm was on my phone, which was in another room.  I had to get up.  It had only been 6 hours - which, for me, is a miserable, miserable night of sleep.
Even more miserable?  It was not raining.  In fact, there was almost sort of sun.  One of the reasons I stayed up past 1 doing work was based on the weather report of 24 hours of rain.  I figured I wouldn't be running anyway, and I don't need as much sleep to just go to a spin class.  But, no!  Cruel, cruel world: I had no excuse not to run.
So, first run after the half marathon.  The nice thing about being slow is that I don't really have a "race" mode, which means that I don't seem to need as much rest after races as I could.  Maybe that's also because I don't push myself that hard.  Could be.

Despite my lethargy, I came to some realizations while I was out there last night.  Such as...:

Fact:  I started at the bottom of this hill, then I got to the top of it.  See those tiny cars down there?  I ran past them, half a mile earlier.  That's pretty cool. 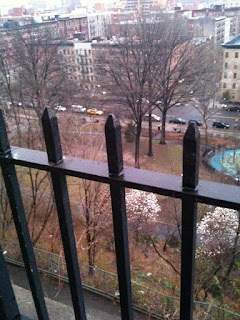 Fact:  A lot of people in my neighborhood evidently like to smoke pot on the way home from work.  That is not cool.

Fact:  This course is less erratic than my Garmin's elevation profile shows.  It starts off with a very, very nice rolling downhill, which I flew down, and then picks up gradually over about a mile.  Then, it drops down again for a few blocks before about a mile of solid hill.

Fact:  That mile of hill sucks.  SUCKS!  It's punctuated by these terrible faux-crests, where you think you're at the top of the hill and you finally reach the peak and then you realize that that hill keeps going at a slightly lower incline.

This route used to defeat me, but yesterday it was no big deal.  Yes, I slowed down a fair bit (I love how the Garmin says I maxed out at a 2:54 minute/mile - bless you, Garmin).  But I ran the whole thing, minus one half block where I was so disheartened by a faux-crest that I slowed.  Per Garmin, my paces were not as inconsistent as I would have suspected.  (The route is on city streets, so the stop-and-go of the paces are about 30 blocks of crosswalks and streetlights.)

In fact, I felt so good after 3.5 that I strapped on my VFFs and took the dog for another .4 around the block.  Lovely night.

Fact:  There's more than a little truth to the old adage that you regret the runs you don't take.
Posted by T at 9:49 AM