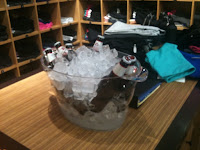 (Lululemon gave me a beer after the run.  I'm a cheap date; now I love them.  It was a Molson Canadian.)

When I left my office to head to the Lululemon Run Club, it went from being one of those days (in a bad sense) to one of those days (in a good sense).  How gorgeous a day!  And I was ready, ready for one of those transcendent runs where the sun shines just so, where the temperature is just absolutely perfect and neither too hot nor too cold, and you feel weightless as though your normal pace is suddenly the speed of light and you could just run forever and ever and ever and nothing bad can happen to you as long as you just keep running and there are no problems in the world and you'll never feel pain.*  I needed that.  I could have had that.

But I maintained a positive attitude, even when the 1 minute breaks were actually like 3-5 minutes and even when the group decided to bail on the final 10 minute set and even, still, when we spent 10 minutes cooling down with stretches afterward (I'm in the no-stretching unless injury warrants it running camp).  I didn't need/want the calisthenics breaks in the middle, but, hey, I did more situps/pushups today than I would have otherwise.  And, with the running to/from the store, it was just over a 4m run, so certainly not a waste of time.

I will probably go back.  The timing works, the location is good, and the people were nice.  I can't say definitely, because I'm not sure who the program is geared for - I rather suspect it's geared for getting non-runners into shape for the summer.  We got a lecture on taking it easy the day after our run and eating a lot of protein and icing our sore muscles.  After 4 miles.  If nothing else, it may not work out with my training - I asked if we could know what the format of the runs would be in advance, and she said that they usually email us all the day/night before.  (In other words, I won't know until that day whether it will be a steady-state run, a fun run, a speed workout, etc.)

Also, I'm mixed on the mid-run exercise breaks.  Too much standing around for me.  Anyone have any thoughts?

*Please, no one mention the Tarahumara now?  Yeah, I read the book.  Yeah, I bought the shoes.  But aren't those poor Indians played out yet?  Shouldn't they be running off into oblivion by now?
Posted by T at 11:12 AM