Lincoln Tunnel 5k: BEST RACE EVER (a title earned by any race where I set a PR)

Here's the thing about a race run in a tunnel: half of it will be uphill, half of it will be downhill.  All of it will be slightly disorienting, because you can't really gauge from your surroundings how far you are into the race or where the hills are.  I could only sort of sense when I got about .25m from the finish from the blast of cold air that was entering the tunnel.

Which was good.  It was cold, rainy, and overall miserable outside.  Inside?  Not quite cozy, but perfect running weather.  Like running on a really long inside track.  Lots of people I talked to were worried about the fumes in the tunnel, but that just wasn't an issue.  It was clean and pleasant in there.  (I wasn't worried about it - I just didn't see how 5k in the tunnel without any cars in there would be any worse than the 20 minutes or so you can easily spend in there in traffic.)

The start was in New Jersey (cue the jokes...), which meant a 6:30 wake up call to take the subway to the shuttle bus.  I was coming off of a bad, sleepless weekend (insomnia, sadly not excitement) and I was in a right foul mood when the alarm went off.  Maybe pizza, chicken fingers, and a cupcake from Crumbs weren't the best pre-race dinner.  Whatever.  Only three miles.

Number pickup was chaotic due to the weather, and the start was even worse.  They had two waves: the first for anyone who was definitely going to run under 25 minutes, then the second wave for everyone else, including walkers and those with strollers.  It was D-tag timed, but another runner at the start warned me that they didn't have a chip mat at the start - only the finish.  So we pushed up, past people in jeans, people with strollers, huge groups.  Getting closer to the start didn't help that much, and the first few hundred meters were an elbowing, pushing, slow mess.  The race encouraged walker participation, which is cool, but it would have been nice if the race organizers had made some effort to encourage walkers to stay toward the back, especially given how narrow the tunnel was.  It cleared out within half a mile.

Once inside the tunnel and in a groove, the downhills were amazing, but the uphills were really, really hard.  I'd love to see an elevation map for the race - is it possible it was only a 100 ft elevation differential from start to midpoint? (I didn't wear my Garmin, obvs, and we weren't allowed to take pictures in the tunnel - I'm guessing that the Port Authority doesn't exactly publish tunnel plans, either.)  Feeling the hill without seeing it was hard, and by the time you could see the hill, it was the last, steeper push to the entrance.  That hurt.  (So much, in fact, that for full disclosure: I walked maybe 20 feet toward the end.  I just didn't think I had it in me at that point.) 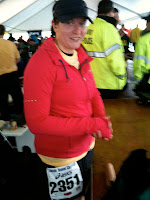 End result: 29:43, a 5k time I haven't seen since... um... a while ago.  In my early 20s I was pretty consistently in the 27-28 minute range, but I slipped to the "just hang below 30 minutes" range in my mid-late 20s.  That's slipped to the 32-33 minute range lately, so this is a welcome relief.  My sister has already taken credit for it, since she's been giving me speedwork plans.  I don't have any split times to report since there weren't mile markers.

My original plan was to take the shuttle back to Manhattan and then run the 7m home, but after the cold of the race start/finish, I scrapped that plan.  Okay, okay, to be honest?  I scrapped that idea before I left the house when I saw the weather.  Miserable!  I'll try today on the treadmill instead.

Here's a photo, some fetching eye candy for you, HA HA HA HA.  I'm not someone who looks all glowing and happy and lovely after a race, especially a cold, wet one.  This picture says, "I want to go home!" while also saying, "I love my cuffins!"
Posted by T at 8:59 AM