My life could be changing!

WARNING: Boring medical diatribe below.  I've spiced it up with unrelated pictures to reward you for reading.

I had some news last week that could alter my life.
Okay, cut the melodrama.  It's not that big of a deal.

I saw my hematologist, and she said that she thinks I can go off of coumadin.

On one hand, this is awesome, awesome news.  I freaking HATE the terrible drug.  I hate not eating spinach - or drinking green tea! - and I hate bruising and bleeding and worrying.  I hate having lost two toenails and I hate wearing a medic alert bracelet.

On the other hand, this is scary news.  I've had two pulmonary emboli and I, you know, kind of value my life. 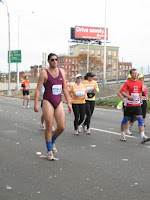 Here's the thing: my risk level hasn't changed.  I'm still heterozygously positive for Factor V Leiden, I still have a high D-dimer (even without a clot), I still have a something-something with a C-Reactive Protein (that would be the one I don't understand, at all), and my bad cholesterol is still high/my good cholesterol is still low.  A ct-scan in November turned up residual damage from the clot; not good news, but not bad news.

So what has changed?  Honestly, I think only my doctor's perspective on the long term use of coumadin.  Evidently, according to her, more and more studies are showing that my predisposition to clotting (Factor V Leiden) does not independently increase one's clotting risk, not without the existence of other factors.  And more and more studies are showing that birth control (which I was on) is more dangerous than previously thought when taken longterm.  So maybe, she thinks, maybe it's worth the risk of putting me on baby aspirin and "monitoring me aggressively." Baby aspirin, combined with shooting up with blood thinners for long-haul flights and vigilant awareness of risk factors, might be enough for me now. 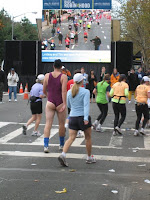 But ultimately, it's my decision, and it's a crapshoot.  I respect that she's leaving it up to me, but I don't feel in any way qualified to make this decision.  Plus, any sort of reminder that medicine is not a perfect science tends to freak me out.

I have two potential international trips on the back-burner for this summer, and if either of them happen I would stay on coumadin through then, at least.  But... after that...  I could be free again!  I could play ice hockey again!  I could take NSAIDs again!  I could eat green vegetables again!  I could save myself the inconvenience of an ER visit the next time I hit my head!  I could live in perpetual fear of a blood clot!  Oh, wait...

And a non-running related bonus photo: Gaybraham Lincoln rides the subway
UPDATED: I don't want anyone to misunderstand and think I'm making a crass joke - this was Halloween and the Gaybraham Lincoln was a self-identification.  He and his boyfriend were joking about how he had "The Gettysburg Address" and dance music on his ipod. 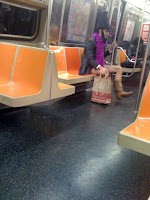