On Sunday, I ran just over 4 miles on the treadmill at the gym.  It kicked my ass.  I wanted to die.  (Or at least to stop running.  Maybe death is melodramatic.)

Actually, I didn't exactly run the miles, unless you consider 3.2mph (18:45 minute miles) to be running.  But, you see, that was the fastest speed I could muster - nearly twice as slow as my normal training runs.

Because, understand, the incline was set to 11%. 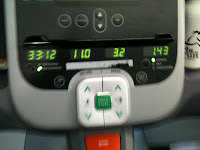 What craziness is this?  It's in preparation for Mt. Washington.

Even this won't be enough - the course description says that the race "has an average grade of 11.5% with extended sections of 18%."  The treadmills at the gym won't go above 11%.  Luckily the race also has a generous (and oddly specific) time limit of 3 hours, 2 minutes - gun time.  If I'm doing the math correctly, that works out to roughly a 24 minute mile.


1.43m in and I'm still feeling ambitious and good.


I'm not out of shape, but the race is going to be rough, if Sunday is any indication.  I hoped to do 7 miles but told myself that I would do at least 4.  At the end of 4, I actually didn't feel that bad, but it was mentally draining, tedious, exhausting.  I stayed well ahead of the race's cut off time, but I was feeling more and more beat down as the minutes ticked by.  I did another 10 minutes on the stairmill at the end just to force myself to push out of my comfort zone, and that was damn near impossibly hard.  Brutal.


In short: I have my work cut out for me.


These are the Karhus I bought recently.  Green shoes! 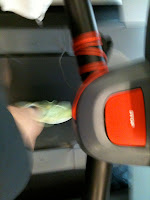 PS: While I'm on a roll citing the Times, I thought this article made a good point about Nike's continued endorsement of misogynistic athletes.


PPS: Another link.  I'm surprised that this guy's editor allowed this xenophobic, racist article to go to print.  What a douchebag.  He actually states that he would prefer Rosie Ruiz to win over someone who "virtually none of us by the end of the week will be able to name."  It's the Meb/NYCM argument all over again.  Maybe if you've never heard the name Cheruiyot, maybe you shouldn't be covering running?
Posted by T at 8:58 AM