It's that time of the month...

...when Tracy has received her new issue of Running Times and feels compelled to blog about it.  If you don't subscribe, you should.  Maybe we'd have more to talk about if we were on the same page, hmm?

-An article on safety when running alone (p. 16).  It didn't offer anything new, per se, and it used the case of Chelsea King to set the tone.  Evidently there was an 8:30am assault in Central Park not that long ago, too, so this is relevant to me.  It's good to be vigilant, sure, and I do sometimes allow my paranoia to derail my running (it's too dark out! I live in Harlem!).  But at the same time, I could get hit by a car or die in a plane crash or be raped and murdered when I'm just out walking (and not running).  When does vigilance become paranoia, and does running make us more vulnerable?

-An article on distance runners striving to become elites (p. 45ff).  This was an interesting article, bluntly profiling the lives of four talented athletes who are training full time (one couple struggled to pay a $300 medical bill after emergency surgery, another guy makes $12/hour at a copy shop to make ends meet).  The thing about this article that bothered me, greatly, is that they only profiled one woman - and she's the wife of one of the men being profiled.  Are there not any energizing up-and-coming women that they could have featured?

-Rachel Toor writes about doing a rim-to-rim-to-rim run of the Grand Canyon (p. 63ff).  The story itself is interesting and well-written; she uses her mother's death as a framing story to give the run meaning.  But it made me want to do something crazy like that.  Maybe I just have trail fever after this past weekend!

To liven the blog entry, here's a photo of my Converse and some bullets after I just loaded the magazines for the rifle I shot last night: 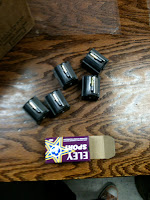