Matilda, the love of my life

This is Matilda, my wonderful dog and my BFF. 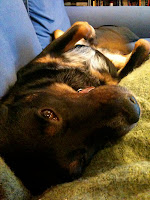 We've been together about two years now.  When I brought her home from the shelter, I was super-excited because she was exactly what I wanted: medium-sized, not too big for an apartment, but not too small for running.  She's a mutt, but she's at least part cattle dog and is appropriately energetic.

So, I bought a fancy harness/lead and read up on running with a dog.  We went out short distances, at first, half a mile, then a mile, then 1.5m after a few weeks.  She was easily distracted, but we stuck to the same paths, as I'd read you should, so that she could get used to the sights and smells.

When we moved to NYC, it was a slightly different ball game, but she adapted.  More sights, more smells, but she was a trouper.  We started upping the mileage, and I took her out for some 3m jaunts - only a few times a week, though, certainly not every day.  I got the impression that she wasn't too impressed with running, but she was showing no signs of any injuries and I figured she'd just get used to it.

One day, we went out for our usual 2m run and then I took her to the dog park later that afternoon.  She was in dog heaven, running around with the other dogs.  When she got home that evening, she promptly fell asleep and slept the sleep of the exhausted for hours and hours.

A few days later, it was run time again.  I got my clothes on, got her harness off the hook, and called her over.  By nature she's an obedient dog, so it was cute to see the look of consternation on her face as she looked at the harness, at me, at the harness, then back to me.  Not to ascribe human thoughts to a dog, but you could see her go back and forth between her need to obey and the fact that she didn't want to run.  Finally, tail between her legs, she made her decision.  She ran for her crate and wouldn't come out with any coaxing.

The next day, she got into the crate as soon as she saw my running shoes go on.  Since then, it's been the same: if she suspects that there will be running involved, she wants no part in it.  I've been able to trick her a few times by wearing the Vibrams instead of my running shoes, which she's actually okay with - we don't go more than half a mile those days.

No moral to this story; I just have a lazy dog.  Running's not for everyone, I guess, humans or animals alike.
Posted by T at 7:48 AM