Let me tell you how not to taper:
The Thursday before your big Sunday race, do NOT go to a museum reception with a friend you haven't seen in ages and drink too much wine on an empty stomach.  The Friday before your big race, do NOT wake up semi-hungover and then go to a 9-5 meeting, followed by a boring lecture, followed by accidentally having even MORE drinks, even though you rarely have more than one drink in a night let alone a week.  Friday night's sleep is important, and you've blown it when you stumble into bed at 3am and wake up with a headache at 9.

Now, to leave the second person behind.
On top of all that drinking, I woke up Saturday morning to discover that it was raining.  Pouring.  Both in the city and on the mountain, evidently.  The rain was supposed to clear up by Sunday morning, only to leave the course muddy and to be replaced by 20-40mph winds.  This was not heartening news for someone who was afraid she wouldn't be meeting the time limits. 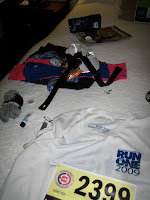 And then, I missed my train.  Originally, I was going to be driving up with my friend Stacey.  She had a slight change of plans mid-week that necessitated a schedule change, so we arranged for me to take the train and she'd pick me up at the Harriman train station.  We had a hotel for the night near there.  I missed the train, spent two hours in Penn Station, and met up with her, but things were inauspicious (to say the least).  She was upset from a harrowing day, I was anxious and watching the weather.  My rough Friday night meant that packing was a "throw it all in a bag" affair, and I had too many safety pins and gels and not enough, you know, clothes.  The weather - originally supposed to be pleasant and in the 60s - was rapidly cooling, and predictions were bleak.  Low 40s for most of the race with winds from 25-45mph.  Huh.  I bought a pair of knee socks and decided to wear both of my pairs of arm warmers with my t-shirt. 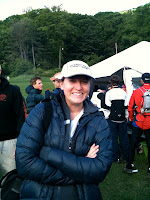 Race morning, it was cold.  Very, very cold.  And windy.  As I was standing at the start shivering, I made the game time decision to trade one pair of arm warmers for my Lululemon hoodie.  Good news: bag check was immediately next to the start, which meant dropping off my bag (and saying a sad farewell to my down coat) mere moments before the race.  I kept looking up and realizing... it was a mountain.

The crowd was energized, and the pre-race conversations were worth overhearing.  Experienced trail runners and people who had done this race before held court before those of us neophytes.  Things they told us (unverified) included: "Dean Karnazes did this race the first year and said that it was the hardest race he'd ever done."  "If you don't end the race bloody, something's wrong."  "If you roll your ankle, don't stop but just keep running - it's after you stop that it swells."  "You'll twist at least one or two ankles."  [I'd like to find the person who twisted three ankles...]

And... we're off!  The course was...  well, it was a trail race.  Here's their description:  "A serious, hardy test for trail runners of any level, The North Face Endurance Challenge at Bear Mountain, NY, takes place on the western shores of the Hudson River, in the craggy foothills of the Catskill Mountains. Runners can expect technical terrain and rocky footing that cuts to the chase, with some trails heading steeply uphill rather than zig-zagging at a gentler grade. Descents end in wooded hollows before the next rapid climb ending with a breathtaking view. Make no mistake: this will be a tough test of off-road endurance."  Being sponsored by the North Face and Goretex made it an odd mix of well-organized/sanitized and super hardcore.  I don't have much to compare it to, but by all accounts the course was challenging.  And yet it was also very well marked and well-supported. 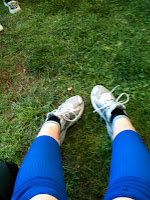 I could narrate the course for you, what I remember of it, but it was what it was.  We headed onto the trail after only maybe half a mile, and the relentless climb began.  It was technical.  There were some scary downhills and a fair number of scary uphills.  Much - but not all - of it was on fairly well tramped path (the benefit of being the fourth race to run through there in two days!).  There was only one short section of sheer rock to climb.  There were tree roots, there were stones, there were logs to jump over, there was mud.  I stopped at the first aid station to ask them for scissors to cut off my knee socks-cum-leg warmers, and the medics freaked out.  "Please, you must sit here.  I'm going to get my kit out of the car.  Wait right here."  I was like, "Dude, I'm just too lazy to take my shoes off!" 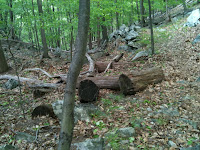 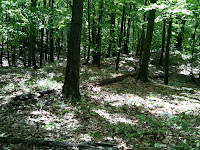 This race was awesome.  Awesome.  I would say that for at least half the time I was out there, there were no other runners in sight.  One of the advantages of being toward the back was the complete and total serenity.  I know it sounds cheesy, but there were points at which I was getting kind of choked up.  It was so beautiful.  This is why we run.  It was all very Walden: if I sped up or slowed down a little I could catch flashes of someone, but for the most part I was alone with my thoughts and with nature.  I saw a deer, people.  A DEER. 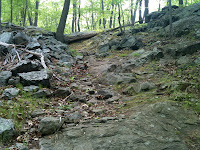 I'll admit it; I walked a lot of the course.  My biggest problem was more psychological than physical: I was terrified of falling.  I know, I know, you're sick of hearing me whining about my stupid blood thinners, but a simple knee skinning could have meant me dropping out of the race.  I bleed a lot.  Also, I was trying to do the whole "perceived effort" rather than pace thing.  I know that once my heart rate gets above 175, I'm toast, so I was trying to keep it as close to 160-170 as I could.  Garmin suggests I could have pushed myself a little harder as I mostly averaged in the 150s.  Yeah, yeah, yeah. 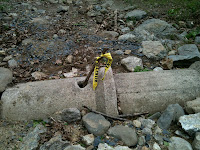 I'm sad I didn't get pictures of the truly technical parts of the course.  Perhaps needless to say, I didn't have my phone out (or my wits about me) during those points. Afterwards, I got back to the city, ate some fried chicken, and slept on the couch for an hour.  Now I'm okay.  Wish I could say the same for my toenails, though...  I think at least one is a goner, bringing the total up to 3 missing just in time for sandal season.  Overall time: 3:39:20.  Even though everyone was slowed down (the winner, who through the wonders of cyberstalking I can say is a 2:15 marathoner, came in at 1:34 and my friend Stacey - who just ran Boston in 3:40-something - ran 2:40), I'm not proud of that.  I'll beat it next year.

Also, I just noticed something.  My Garmin said that the total mileage was 13.6.  I saw that and was a little confused - there weren't any tangents or anything, but I did get (mildly) lost once, but only for a few minutes.  But then, check this out: