It seems like I've reserved pretty much every Monday for a race report.  Believe it or not, I do look forward to a weekend (someday soon?) when I'm not racing.  Until then, I present you with the latest update from Tracy's Crazy Racing World.

I'm going to keep this one short.  I don't know what it is about my low-mileage training program that's working so well, but something's clicked.  I was 7 minutes faster than my March half for a time of 2:20:53. 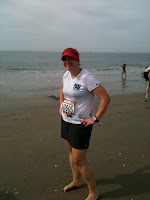 The course was two 3.5m loops of Prospect Park with its infamous mile long hill, followed by a 6m straight shot down a highway to Coney Island.  The weather was nice but humid.  The race ended on the boardwalk at Coney Island, after which I took a brief dip in the ocean.  Sort of a glamorous Atlantic ice bath, if you will.

And then I had Thai food for lunch with my colleague and his wife, had some organic, locally made Root Beer flavored ice cream, bought a new skirt, and went home and took the best nap I've taken in years.  Wonderful, wonderful nap.  You don't care about any of that, though, do you?

I feel pretty good about this race.  The weather was in the low 60s at the start but humid - my shirt was drenched with sweat by the second mile.  This did cost me some time in that I took Gatorade and water at every water stop, walking for maybe 30 seconds with each.  Despite that, I managed a fairly consistent pace and never faltered.  I probably could have gone out a little harder, but I don't feel like I took it easy by any means.  I befriended a woman and her pacer friend on the course - they were totally fun, and they carried me through the last few miles.  When I finished, I felt like I truly could have run another 3 or 4 (at least) at that pace.  This bodes well for a fall marathon.