Y the Ramble?  Good freaking question.  One that I asked myself for just over an hour yesterday morning.  I get that the name of this race is a play on the fact that it started and finished at a YMHA, but why?  Why?  Why?  This was a mean, sadistic, awesome race.

I decided to bail on Broad Street, definitively, shortly after receiving this email:


It is important that the runners must understand that the amount of cups provided are for the entire field of runners.  It is up to you to respect your fellow runners and only take one cup at a time at the water stations.  Those of you who feel the urge to take large amounts of water are only putting yourselves at risk for over-hydration and are depriving your fellow runners of much need water along the way.  Please realize that we have increased the calculations of our cup distribution and water supply to try to meet your needs.  However, we cannot control your personal actions on the race course.  You must be responsible for how you feel during the event.  Medical teams are on high alert and our volunteers have been instructed to rise to the challenge.

10 years ago this past weekend, the Broad Street Run became my first DNF.  I had run my first marathon the week before.  It wasn't my legs that kept me from completing the race, though: it was the unseasonably warm weather.  It was close to 80 degrees at the start, and by the time I got to the first water station at mile 2, I was suffering, badly.  I tried to stop for water, but the volunteers had run out of cups.  Same thing at the next two water stations.  Realizing this would be the case all along, I got on the subway, instead.
No worries, I quickly caught the tail end of advance registration for the Y the Ramble 10k instead.
Race morning, I took out a zipcar and headed up to the Bronx.  I'd never been to Riverdale before, and the area is impressive: beautiful, large houses with gorgeous river views overlooking northern Manhattan.  And hills.  And hills.  Crazy hills. 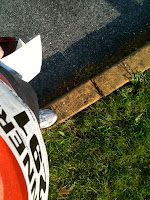 The race was refreshingly old school.  Notice anything missing in this photo?  No chip, no d-tag.  When there are fewer than 300 people at the start, chip timing's less relevant.  While New York is an amazing city to run in, it makes me sad how many runners here have never had the local race experience.  The NYRR favors 4m races, and I know super-talented runners who have never run a 5k, let alone a local race like this.  Keeping with the old school vibe, I went to turn my Garmin on a few minutes before the start and realized I'd left it at home.

OMG OMG OMG HOW AM I SUPPOSED TO RUN WITHOUT A WATCH THAT TELLS ME MY PACE AND HEARTRATE AND DISTANCE???  Oh, yeah, that's right - like I did for years without it.

So, the race itself.  First off, I was mad dehydrated.  We're having an unusual heat wave, and I hadn't slept well the night before on account of the heat.  At the 1m mark, the only thing that kept me from turning around was the realization that I would just have to walk back that same path I'd just taken.  Where the 5k and 10k split off, the only thing that kept me on the 10k path was telling myself that I wouldn't have to go back out and run 4 more (I'd promised myself 10 for the day) if I finished this race.  By the turnaround, I was 8 people from last and walking as much as I was running.  By 4m, I'd had to take my rings off because my hands were so swollen from dehydration.  Someone called out a time, and I realized I'd been doing 11 minute miles, so I set my goal as 1:10.

Actually, I set my secret goal as beating the annoying dude.  See, there was this guy running nearly neck-and-neck with me who kept doing that sprint-walk thing - you know the one.  He'd sprint to get ahead of me, then fall to a slow walk.  I tend to run my own race and not care about beating other people, but I understand the drive to pick others off.  That said, be sure you can maintain it.  I wouldn't have cared if he'd beat me, except for how obvious his tactics were.  He held on for about a mile before I left him behind for good.  (Link to photo.) 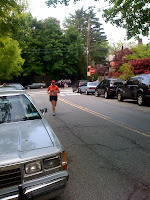 I barely eeked it in, finishing in 1:10:53.  The last mile was rough - not only was it all uphill, but a volunteer told me I had a mile left only about 3 minutes after another volunteer told me I was a quarter mile from the finish.  Then, like a mirage, about 5 minutes before the finish, a wonderful man came bounding along the course toward me to give me encouraging tips about form and run with me for several blocks.  That rocked.  At the finish, one of the race directors had a bullhorn and was yelling, "Young lady! You can do this!  Do NOT stop to walk! Let's see some good uphill form!!"  That... didn't rock.

One small vindication is that I did a 10k last summer in 1:10:46 - and that was a totally flat course.  So I've been improving. 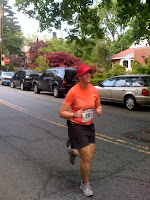 Where on earth did this smile come from?  Oh, yes, I can see the finish from here!

Final thoughts:
1.  Those hills SUCKED.
2.  I must train on those hills.

And some more fun...:  A photo of the old school leaders board (I'm not on it, natch) and the elevation profile of the race are below.  Hm.  It really doesn't look that bad when I look at it here.  Hm. 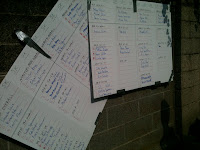