This is so unbelievably impressive to me that I felt it deserved its own post.

The female winner this year was a woman named Shewarge Amara who won the women's race in a record-setting 1:08:21.

That is amazing on its own; however, more amazing is that she did it in borrowed clothes.

I was sitting at the start, listening to the announcer make last-minute announcements, when he said, "We have a slightly unusual request...  If any of you have a spare set of running clothes for a slender woman, average height, please approach the podium."

It turns out that Amare's driver had locked the car - with her running clothes and shoes still inside.  So Amare borrowed a pair of shoes and a singlet and proceeded to run the race.  (I swear the announcer asked for shorts and a singlet, but the reports I'm finding only say a singlet and shoes.)

Next question: a local 5m race this weekend is giving away medals at the end, and Prince Harry and Heather Mills McCartney and Governor Patterson and the McCains are all running.  Do I do it?  Rumor has it Prince Harry may be single these days... Then again, he is kind of young and did once dress up as a Nazi for a gag.  Dealbreaker? Perhaps I could overlook it for the crown prince - but for the third in line for the throne? 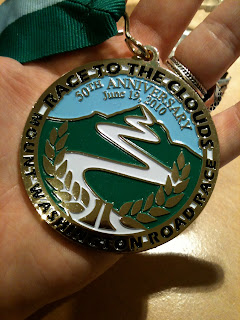