I can do this race report in two words:  THAT SUCKED.

If you want more detail, I can give you seven words:  Gorgeous day, well-organized race, dead legs.
Let's add an extra four words to that: two blizzards = bad idea.

When I was still easily able to come home for Thanksgiving every year, we would race the Dan Gibbons Turkey Trot every year.  And I won every year.  And he had some injury or excuse every year.  The photo to the left is our family Thanksgiving, years ago.  My friend Jason from college is in the front, then I'm the one with the freakishly large piece of lasagna on her plate, and my dad is the one wearing a paper plate around his neck.  A paper plate with the image of a turkey on it - it was his turkey award (for being such a turkey by losing the race to me).

We've moved on to other races since then, and this year's competition was the Soldier Field 10M.  Of course, a few weeks before the race, the excuses started pouring in.  Evidently he hurt his hamstring, aggravating an injury he got years ago in the navy.  He also tried a new tactic this time: pointing out to me that there really isn't any glory in beating a 60 year old man.  I'll admit; I was tempted to throw the race and let him have this one.  For like a second.  Okay, no, I actually wasn't.

I felt good about the race.  The weather was great, my training has been going well, and I was ready.  Sort of.  A short run on Thursday felt unusually heavy to me, and by mile one of this race I knew I was toast.  I had not one but TWO blizzards the day before (yes, I have a Dairy Queen problem).  I was tired.  I went out too quickly and, worst of all, I evidently drank too much water at the start and had to stop at a port-a-potty at mile 3.  A port-a-potty!  Mile 3!  You want to know the worst part of it?  I dropped my Clif Blocks on the floor of the port-a-potty.  Yes, they were still sealed, but no, they were way too gross to eat after that.

The out and back course along the lakefront started south down LSD - literally on the road, with one lane of traffic still open - and then circled back along the lakefront path.  The gorgeous, 65 degree breezy weather of the start quickly ascended to the low-80s - not unbearable, but relentless, with little relief from the sun as we pounded down the highway.  I don't know what to say.  I was just feeling it, badly, in my heavy heavy legs.  By mile 5 I was having to make deals with myself ("You get one minute of walking, but only if you make it to the water station up ahead first"), and by mile 8 I seriously thought I should just walk the rest in.  I ended up finishing in 1:49:06, three minutes off my February 10 mile race.  Considering how bad I felt throughout the entire race, I consider it a victory. 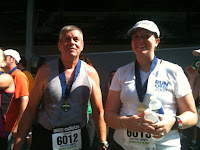 And evidently I wasn't the only one who suffered in the heat: rumor has it that they actually raised a black flag shortly after I finished, telling runners that the conditions were too extreme and that they needed to walk because the race was canceled.  As we were driving home, the bank thermometers along the Eisenhower Expressway all read in the mid-80s and the day did become hotter still.  Coupled with the humidity, it was uncomfortable, but not race canceling weather.
Posted by T at 8:35 AM