The day before this race, I did NOT want to do it.  Record heats predicted.  Course with no shade.  High humidity.

It wasn't just the usual voice in my head that tries to talk me out of stuff, though.  You know, the voice that tells me, "Sleep in! You can do your run on the treadmill tonight," or, "Aren't your legs tired? Just take it easy and give yourself a rest..."  This was a loud, stern voice, saying, "If you do this race, and you run it even remotely hard, you will be f-ed for the rest of the week.  And then you will be sacrificing crucial training for a pointless race that is NOT your goal, one where you stand no chance of PRing and further more, you could hurt yourself/suffer heat exhaustion/risk dehydration.  You're being stupid."

Um, yeah, I was kind of hospitalized for dehydration once.  I was young.  I don't like to stay hydrated.  In my stupid head, proper hydration =  bad things (sweating too much or having to go to the bathroom too often), not good things (one's body functioning properly).  I know this is dumb and I'm getting over it.

You might see me walking around, carrying a water bottle.  Make sure I'm drinking from it and not just using it as an accessory.

My sister/coach told me in no uncertain terms not to do the race.  And then my friend Renee, who I met running the Brooklyn half, told me I had to, to keep her company.  I was kind of leaning that way, anyway, so it wasn't a hard sell.  I mean, I needed to do a long run this weekend somehow, and I'd rather do it with a friend and with volunteers handing me Gatorade. 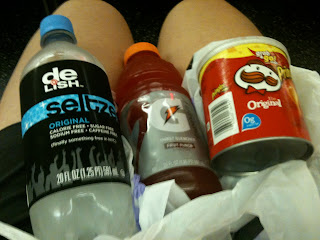 Long story short: 4 miles in and my race was over.  I walked off the course and took the subway home with a short detour to the drugstore - my sister told me I needed salt and should find some packets of it to take, but I substituted Pringles.*  That counts, right?

Could I have finished?  Who cares?  It was in the 90s and I was dragging by mile 4.  The race was sparsely populated, meaning that when I left a port-a-potty just past mile 4, only 50 minutes into the race (chip time, though), they were re-opening the streets and closing up the water tables.  I was running this race basically as a supported training run, but races (whether  your heart is in them or not) are NO fun when it's clear that you're far, far at the back of the pack.

Sure, there's always the argument that I can't predict marathon day conditions, and training in bad conditions is a way of preparing myself for the unexpected.  That's true.  I doubt it will be this brutally hot on marathon day in November (and honestly, if it is, it would be an odd fluke and I suspect/hope they'd cancel it).  But even still, that's my goal. This wasn't.  Finishing this race would have had a negative impact on the rest of this week's training.  No regrets.**

*I also discovered that mixing Gatorade with seltzer water is truly lovely as a post-run refreshment.  Seltzerade! Gatezer! Seltgatoradezer!