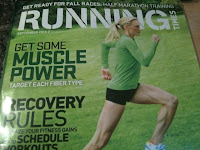 Man, do I love this magazine.

I'm not sold on the coloring of the cover art, but that's Shalane Flanagan preparing for NYCM, so I'll take it.  Did she tell them that she's not actually Irish-born, despite her name?  (I couldn't find a photo online, so I took one myself - sorry for the quality.)

Anyway, let's cut to the chase.  What of the contents tickled my fancy this month?

Oddly, the parts that resonated the most with me were not even true magazine content.  Instead, a letter to the editor (p. 8) and the editor's note (p. 6) hit home.

First, the editor's note.  I won't give too much commentary, but he summarized some of what I was grappling with a few days ago (in a more concise and eloquent matter):


"I discovered that my running of late had fallen into a common trap: It had all become a means to an end. Many people run to accomplish other purposes: to lose weight, live longer, get ripped abs, find a girlfriend/boyfriend, raise money for a cause.  I've always felt that, while these are nice side effects, runners run because the activity is worthwhile and enjoyable in itself.  Running "for" something else seems analogous to having sex just to get pregnant: It works, but you're kind of missing the point."

I don't have kids so I can't verify the last line, but I like what he's saying.  A lot.

Then, a letter to the editor:


"When a friend mentioned possibly backing out of the Nashville Country Music Half Marathon last month, I pointed out that her $110 entry fee was nonrefundable.  'That's okay,' she responded, 'it will be my donation to the city of Nashville.'  I then explained to her that the event was owned and run by a privately held company called Competitor Group, Inc., ... and that much of her entry fee would likely be going to enrich Falconhead Capital, a private equity firm situated about a mile from where she works in midtown Manhattan.

"When someone who regularly runs one of their races - sorry, "participatory event assets" - has never heard or seen their name, it isn't hard to see the genius in Competitor's business model.  Road racing has been an overwhelmingly nonprofit endeavor for so long that most runners are willing to assume that an absurdly high entry fee means that more of their money will be funneled toward some good cause or another.  Meanwhile, the thousands of volunteers who make each of Competitor's events possible are almost certainly unaware that they are providing free labor for a for-profit company; the online volunteer solicitation for the Rock 'n' Roll San Diego Marathon even begins with the words 'Help support your community and 30,000 runners and walkers...'

"I'm all for free enterprise and private profit, but can you imagine Walmart trying to find staff with language like, 'Help support your community and thousands of shoppers by volunteering'?"

In reproducing this letter here, I am NOT suggesting that volunteering at a race is not noble.  Hell, if nothing else it's fun.  But, know where your money is going.  Race entry fees are creeping up and up and up.  Most of us are not getting significantly more return on our entry fees than we were a few years ago.  And yet, it's supply and demand: as long as Rock 'n' Roll can fill a half marathon with $100+ entry fees, they will continue to charge that much, or more.

The Philly Distance Run was always one of the highlights of my fall when I lived in Philadelphia.  I only ran it once, but I went to the expo as often as I could, and I loved knowing that the elites were in town, using it as a marathon tune-up.  Khalid Khannouchi, Catherine Ndereba, and Deena Kastor all set course records at the race - Deena's was a smoking 1:07:53, also an American half-marathon record.  Now, the race is owned by Competitor, and the FAQ on the website includes, "Can I train for a half marathon in five weeks?"  (Okay, fine, Ryan Hall is running it.)

To conclude my paean to Running Times?  Not one but two full articles on female runners (Shalane Flanagan and Elana Meyer - and Shalane is even wearing the same shoes as me in one of the photos. It's LIKE WE'RE THE SAME PERSON).  Love it.
Posted by T at 8:14 AM