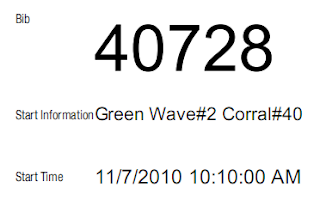 That would place me in the second wave, on the lower level.  Having to suffer through the lower level - choosing between running on the inside with no view, or running on the outside with a view but getting peed on by runners up-top - is my penance for under-reporting my anticipated finish time and being assigned to the second wave when I'm so clearly third-wave worthy.  NYCM has a staggered, wave start, with three waves 30 minutes apart.  They base your wave assignment on your self-reported anticipated finish time, and I was ambitious when I registered.  My typing fingers made a promise that my running legs can't keep.

So, to celebrate having wave and corral and bib numbers that all avoid my OCD fear of odd numbers, I went to City Sports and bought this: 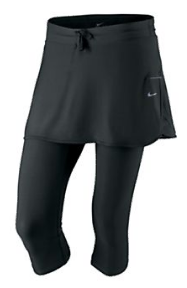 This, obviously, is a Nike Skapri.  Get it?  Skirt + capri?  Yeah, I don't think that terminology will catch on, either.  The "skapri" (AAAAHHHHHH worst term ever) is essentially the skirted swimsuit of the running world. It says, "I want to wear fitted capris, but my thighs are too large to be inflicted upon the world without being covered."  It says, "I'm out here and I want to have fun! But I also have severe body issues and am full of self-loathing."  Nah, I'm kidding.  It's actually cute.  But there were conspicuously more size XS and S left at the store than there were M or L.

Finally, because this post is labeled as "a few things" and I know that two is not a few, I'll offer a third tidbit:
FRANK SHORTER IS ON FACEBOOK, AND HIS PROFILE SAYS HE'S SINGLE.
Oh, dear.  This could be the year I make my dreams finally come true.

I haven't had the guts to friend him, but just seeing his smiling face there, with his friend list (including Pete Pfitzinger and Dick Beardsley, among others) made me very, very happy.
Posted by T at 8:02 AM