I ask, you answer

I'm not doing the High Heel-a-thon today, after all.  I woke up with a stomach thing yesterday and skipped my run, so I don't feel like I can skip or truncate my run today.  Plus, the likelihood of me twisting my ankle is just way, way, way too high.  My physiatrist called me "much improved" at my appointment on Monday.  I'd hate to let her down with a new injury.  I still love the idea of a gimmick race, but not with a marathon looming!

Yesterday I wrote about some of the annoying things I'd seen at the 18m tune-up.  In the comments and on twitter, I got some other responses.  Some commonalities emerge...  Here are a few of the twitter responses I got: 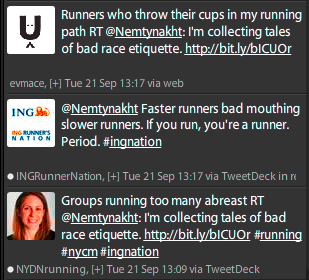 I said it in the comments yesterday, and I'll say it again here: if you're going to be that pedestrian crossing the path of a race, first of all, don't do it.

Also?  This totally arrived in the mail yesterday (and yes, I'm old): 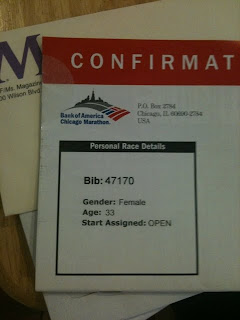 At first I was a little disturbed to be #47,170 when there are allegedly only 45,000 runners.  But I did register mere moments before the race closed, so I'm assuming that's what they based it off of, not their assumption of my speed.