I have a new training plan.  I'll reproduce it here for you: 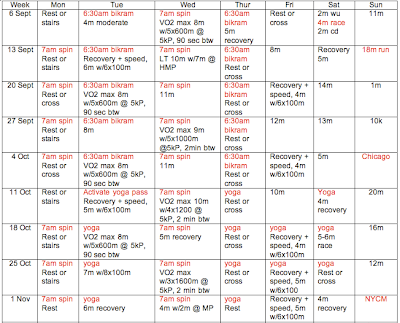 As you can see, my sister took away most of my longer runs.  Instead of multiple 20s, I'll now do one 20 before NYCM.  In place of the long(er) runs, I'll have several back-to-back weekends, running three days in a row with two of those runs being double digit mileage.  She thinks that this should keep my mileage low enough that I don't get reinjured, but it will simultaneously get my legs used to running while tired.

I got a groupon for the bikram studio near me, so you'll see that on there as I'm going to try to incorporate yoga.  Let's be realistic; I may not end up doing it.  (At least not that often.)  Basically, anything in red represents "wishful thinking."

Incidentally: today is one month until the Chicago Marathon.  Yup.
Posted by T at 8:22 AM