Have I mentioned how much I adore Running Times?  Only, like, always.  I know.

Let me enumerate for you why I like the magazine:


It's hard to keep from comparing Running Times with Runner's World.  I subscribe to (and enjoy) both magazines.  That said, Runner's World seemed to undergo a shift a few years ago to cater more toward amateur runners.  I'm an amateur runner, sure, but I'm still concerned about my performance.  I nearly gave up on Runner's World a few months back when they did a feature on a runner who knits... during marathons.  Props to her, and I'm sure her times are better than mine, but I try to eschew gimmicks.

So what treats did this month's magazine have in store for us?

First of all, they have an extensive feature on elite women who balance full-time work with competitive training.  The take home message?  (As always:) I get too much sleep, evidently. 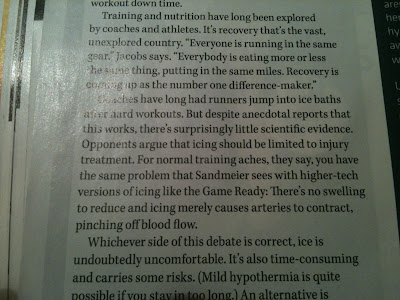 But next, my favorite part.  Find it yourself above or on p. 64: compression may just work as well as ice baths for recovery.  VINDICATION for those of us who hate ice baths!!!
Posted by T at 8:22 AM