I decided to do more "how many Chicago runners qualified for Boston?" Now you have a full set of data from this year (men and women) and last year (with near-perfect conditions). 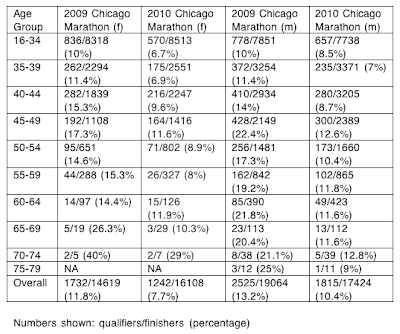 Here are my completely non-scientific conclusions based on two years' data for this one race:

I didn't really need to know that I got beat by an 83 year old man last year (by a wide margin), and I certainly didn't need to see how many people were heartbreakingly close to their qualifying times (3:41:03! that sort of thing).

As an fyi that most of you probably know, Boston allows 5000 non-qualifying runners to enter the race: 1600 charity runners and other "special invitation" folks (likely how Will Ferrell got his bib several years ago).  While I do personally agree that charity runners should have to qualify, I don't necessarily agree that their participation (as qualifiers or not) in any way dampens the prestige of the race.

More inanity, fewer statistics tomorrow, I promise.
Posted by T at 11:33 AM