Thinking ahead to beyond the marathon: more stairclimbing

So, the other day, I was looking over my schedule for the next few weeks and I realized that I'm headed back to Chicago in three weeks to climb the Sears Willis Tower with my brother.  My brother recently lost 80 pounds via a trainer and the stairmill.  Earlier this year, to celebrate, we did a stairclimb in a local "skyscraper."  (Must put "skyscraper" in quotes - it's huge for Chicago's suburbs, but not so huge in the grand scheme of things.)  Given how much easier that race was than he expected, my brother decided that this year we're climbing the tallest building in Chicago.

When I did the stairclimb last year, I was just a few weeks off of having run up the Empire State Building.  I can't say that I totally rocked that race, and I can't say I prepared, but I had invested some time on the stairmill beforehand.  This time around, I've done nothing specific to prepare.  I haven't even taken the stairs up to my fifth floor apartment or my fourth floor office in about six months.  Sad but true.  I haven't seen the inside of my gym in at least two months.

My brother, on the other hand, does an hour on the stairmill at least once a week.  I guess I'll let him have the "victory" on this one; he's earned it.  He tells me that this plan is to run  next to me the entire time until there are only one or two floors left, and then he's going to sprint ahead and beat me.  That plan does tend to work better with an element of surprise, in my experience, but we'll see what happens.

Of course, since I've procrastinated, plane tickets for that weekend are inexplicably expensive.  Big problem with living in NYC and attempting to travel on Friday evenings/Monday mornings: evidently, loads of people like to do business here (who knew?) and the planes fill up!

I'm not too worried about this race, honestly.  It's a "fun run," and my experience last year showed me that it's hard to prepare in a targeted manner and that I will not be the last to finish.  Here's the not-very-nice fundraising email I sent out to my immediate family (I call my brother "Poochie" - long story): 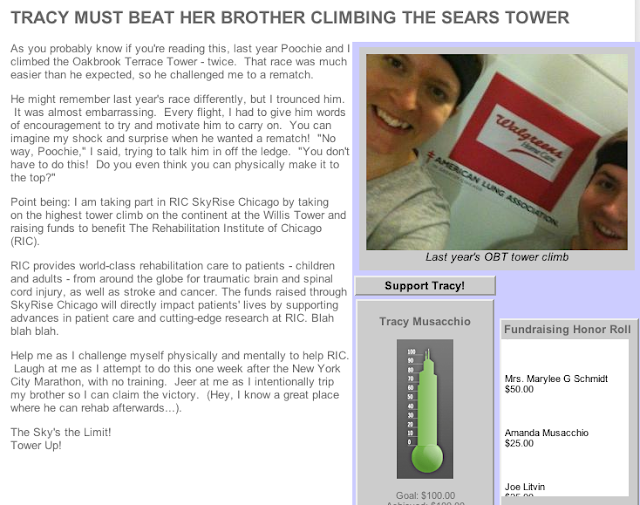