My mood picked up slightly yesterday afternoon, after I came into contact with this: 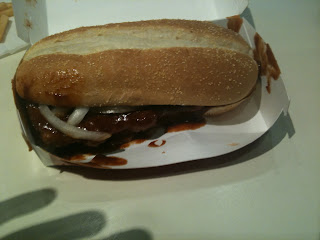 I know, I know, I've sworn that I wouldn't bog you down with pictures of food.

But this - this! - this isn't food.  That's not to say that it's so divine that it transcends food.  No.  Quite literally, I'm not sure that this is actually food.  NPR called it particlemeat.

This, in case you didn't recognize it, is a McRib.  Deliciousness.  The stuff of legend.  And now available at every McDonald's, nation-wide, for a limited time only.  Judging from the fact that literally every person I heard order or saw eating during my 10 minutes at McDonald's ordered a McRib, it's a hit.

So, post-lunch, I hit up the expo.

What did I get?

Free stuff, from my race packet, first.  Well, almost free stuff.  Sort of free stuff that I paid $135 for the privilege of receiving. 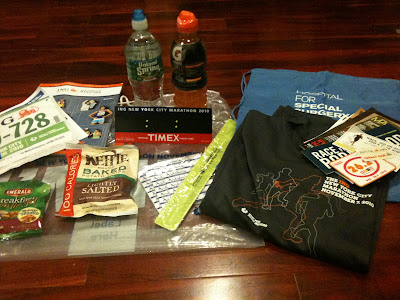 Contents, in sort of clockwise from upper left:
-bib (GO GREEN WAVE #2!!!)
-magazine (still working on the official handbook... hopefully I can get to this one before next year's race)
-Timex fridge magnet (to record my crummy time)
-one bottle Poland Spring, one bottle Gatorade (I was like, "Awesome! This bag is so heavy and full of great stuff!!... oh, wait, that's all just water and gatorade...")
-crummy bag from the Hospital for Special Surgery (that I will be throwing out promptly)
-pamphlets and other advertising (that I will be throwing out promptly)
-long sleeved race shirt (not too sure on the design - not the ugliest, not the prettiest)
-neon slap bracelet-cum-ruler
-an inexplicably large number of nasal strips (12 of them)
-potato chips and "breakfast on the go" (packaged by someone who thinks that breakfast can fit into a mini-pack - silly, silly)
-all on top of a gear check bag.  That I won't be using, because that's not how I roll.  NO BAG CHECK FOR ME, SUCKERS!!!  Slow your roll, peeps, I'm headed RIGHT to Shake Shack when I finish my race.  No UPS trucks for me.

Next, things I purchased with my own hard-earned money.  Roughly as expensive. 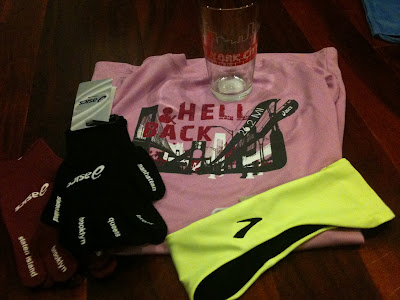 -NYCM 2010 pint glass
-Asics ridiculously expensive "Hell & Back" t-shirt
-two pairs of 5-borough gloves, in black and mauve (very tempted to go back for the other two colors...)
-Brooks Nightlife reflective headband, so no cars will hit me if I run in the dark

If you're looking to cyberstalk me, it's bib #40728.  Settle in for a long day at your computer, though, because I intend to be slooooow.

If you're looking to real-life stalk me, I start in wave 2 (sometime after 10:10am) and I'm aiming for somewhere in between a 5 hour and a 6 hour marathon.  That's real specific, no?  I'm trying to be realistic here.  I'll be wearing a purple skirt, an orange t-shirt, hot pink arm warmers, a white baseball cap, black compression socks, and a pained expression, not unlike this get up: 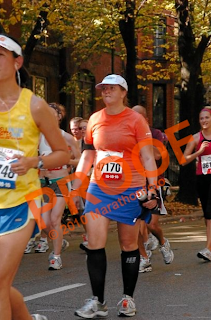 Minus the water bottle and the iphone on my arm.  I might add a bright blue vest if I'm feeling chilly that morning.
Posted by T at 7:32 AM