When I lived in Philly a few years ago, I had an amazing apartment in an excellent location right near Rittenhouse Square.  How I loved that apartment!  Until - until - they put in a new bar on my block and simultaneously banned smoking in bars.  Suddenly, every weekend, I would sit in my living room and hear the sounds of drunken idiots yelling at each other as they overtook the sidewalk to smoke.  Invariably these drunken idiots all had south Jersey accents.

Moving to New York didn't do anything to help my feelings for people from New Jersey.  However, I had an experience this weekend that may have.

On Saturday, I was due for a longer run.  It'd been three weeks since I last ran a marathon - time to get myself in gear.  Somehow, unbelievably, I managed to con a friend into taking the train down from Connecticut to run in the city with me.  (Okay, it's not really a con so much as a promise that I'll go up to Stamford later to do a long run or two with him as he prepares for his first marathon.)

I had canceled plans at the last minute last weekend to run over the GWB with my friend Mike, so this weekend, I suggested that Aron and I do the same.  We were aiming for about 10m, so we figured we'd cross over, see what was in New Jersey, and then turn around and make up mileage along the Hudson River if we needed to.
Well.  Well.  Well.  We didn't need to make up any miles in Manhattan at the end of the run.  In fact, as it turns out, we could have run for miles and miles.  Those of you who already know that I ended up in the Palisades are probably laughing at my naivete.

How gorgeous!  How lovely!  Running downhill from the GWB, we followed a road down to a park at the base of the river.  From there, we admired the view for a bit, and then we found some stairs.  What else to do besides climb them? 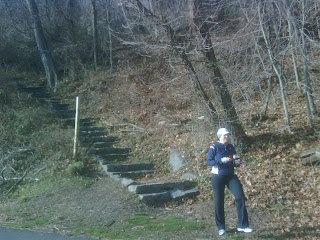 Let me tell you the best part of the run: Aron asked me if I'd lost weight since the last time he saw me, over the summer.  I don't really have any idea if I have or not, but I do know that Aron is now my new best friend for saying that, and also I will never wear any other pants to run besides the ones I was wearing today.
Posted by T at 7:59 AM