I swear this is running related.  Bear with me.

This is where I spent my day yesterday:

The Step Pyramid of Djoser at Saqqara.  The world's first pyramid.  Not built by aliens and most certainly not built by slaves - but that's a history lesson for another day.

Most of the later pyramids (like those at Giza) have a very predictable layout.  There's a pyramid, with a burial chamber for the king inside; there's a mortuary temple near the base of the pyramid, where the rites and rituals for the dead king could be performed; and there's a valley temple down near the river, connected to mortuary temple via a long causeway.

The Step Pyramid, being the first one built, is slightly different.  Instead of the temples like the later pyramids have, Djoser has a heb-sed court.  For those of you too lazy to click the link or too disturbed by my linking to wikipedia, let me summarize: after the king had been in office for 30 years, he was expected to participate in the heb-sed festival to show his ritual rejuvenation, proving that he was fit to continue to rule.

Part of the festival involved a run between two boundary markers.  So, here you have it. 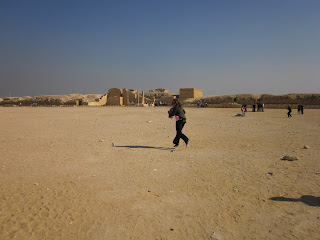 That's me.  I chose not to wear a bull's tail, as the king was thought to.  However, as proof of my fitness, five photos were taken of me running.  My feet aren't touching the ground in any of the photos.  WEIRD.  Sadly the pyramid wasn't visible in any of the photos, but I'm running toward it in this image.

It wasn't all sunshine and running in the sand at the pyramids, though.  I hate going to see them.  They're absolutely exhausting.  Yes, they're also cool to climb inside. 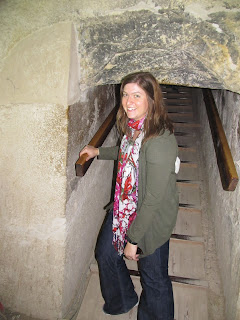 But sometimes, just sometimes, if you're a big enough idiot, you bang the crap out of your head climbing out of a pyramid - the sort of smack where people are stopping you to ask if you're okay, you break your sunglasses, your students are uncomfortably asking you if they should keep you awake overnight to watch for signs of a concussion, and your neck hurts for hours (and counting) from the impact.  I also messed up my knee - not sure how I did that one, but it hurts fairly badly.
Probably worth it.  I got to spend the day at the pyramids, after all.
Posted by T at 7:35 AM