Crossing the streets in Cairo can be harrowing.  It's often likened to playing live action Frogger.  The streets are crowded and chaotic, and pedestrians just kind of dart in between the cars and hope for the best. The cars stop for you, usually.  I've never gotten hit (well, not anything more than a bump) but I have been in cabs on two separate instances that have hit men - as in knocked them down.  One guy flew over the hood and fell off the back of the car.  The driver stopped for long enough to yell at him before continuing to drive on.

Once you're practiced at the art of street crossing, the key is to do it with nonchalance.  If you act scared, dodging the cars with fear in your eyes, the drivers can sense it and they'll get more aggressive.  I'm not naming names, but someone who reads this blog regularly, who has been to Egypt, who is my blood relative and who is female may have been reduced to tears trying to cross the street in Cairo.  (She definitely was crying.)

Recently stoplights have been installed downtown.  This is kind of a joke - no one pays any attention to them.  But, intriguingly, they have a walk sign on them: 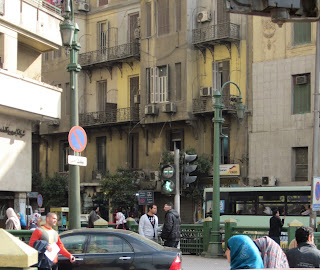 Let's see that a little more closely, shall we? 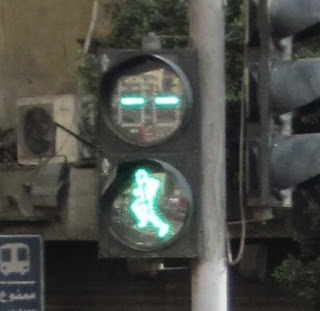 That guy is adamantly not walking, he's running!  You can't tell from the photo, but the little man is animated on the stoplight so he actually does a convincing running man.
Posted by T at 8:15 AM