I don't mind running in the rain. Don't tell anyone this, but I actually kind of like it. The rain is cooling. It feels refreshing. Sunday morning, it wasn't even raining that hard.

And I love the 5k distance. It's just perfect for racing. Adrenaline carries you through the first mile, you coast through the second mile, and then just one more mile and you're basically done. It's easy to gauge what your pace should be (somewhere between "comfortable" and "I want to die") and it's easy to hold that pace for only 3m.

I even knew what to expect with the hills of this race, since I'd done the race before. The race took place in Washington Heights and, let me tell you, the "Heights" part of its name is no joke, fool. The hills are formidable - the sort where you look ahead to suddenly be faced with an uphill wall of people, stretching into the sky. 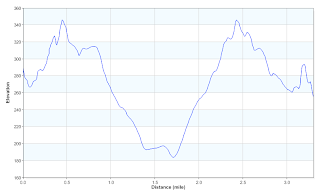 My legs were dead. I ran to the race as a 1.5m warm up, but I knew within a few blocks of my house that it wasn't my day to race. On top of that, I'd misjudged the distance to the start. Intending to get there with a few minutes to spare, I instead rolled into the last corral. My usual spot in the second-to-last corral was hard-earned, and it made a noticeable difference that at the tail end of the last corral, I was surrounded by loads of walkers. And kids. Lots and lots and lots of kids. And overdressed people. (50 degrees for a 5k does not mean running tights and a long sleeve tee under a fleece under a jacket with a camelbak.)

And the crowds! The crowds! I was at the 2m mark before I could set my own pace. The crowds were thick, they were all elbows and swear words (ahem, okay, maybe that was me), and they did insane things like walk four abreast or stop, cold, to walk in the middle of the one-lane course. At the one mile mark, I was actually so frustrated with the thickness of the crowds that I was forced off the street and onto the sidewalk - the course itself was unpassable with walkers. Leaving the course is cheating as far as I'm concerned. I felt my eyes well up with tears and I told myself to just turn around and go home. I snapped out of it, luckily, but it just confirmed that this was not my run.

And the kids! Let me say, I totally support kids racing. I think it's an awesome experience for kids to have. Kids should race - that is, as long as they're not in front of me and behaving erratically, which seems to be always. (And finishing before me, but I can let that go.)

Anyway. The first mile sucked, hard. The second mile sucked, but a little less hard. The third mile was okay, I guess. I ended up finishing about a minute slower than the race I did three weeks ago. Disappointing.

I am DONE with racing. I am done with crowds, I am done with paying money to get a bib and a t-shirt I never wear in order to do a mediocre job of covering distances that I could cover on my own. I'm done with being dissatisfied with myself. I run for me and not for race times.

I went home, took a warm shower, made myself some tea, and sat in my chair listening to Jim Croce. That cured it. I stopped thinking of my morning as a crummy 5k race and started thinking of it as an okay 6m run. In the rain.

Wouldn't you know, though? I then - later that same night! - went and registered for yet another race in April. Another 5k, even. I'm kind of rather obsessed with airplanes (in that I'm terrified of them) and I've always wanted to run a race on a runway. When I saw that registration was open for the JFK Runway Race, I was in. Plus, it's a no excuses course. You can't get flatter than a runway.
Posted by T at 8:12 AM