Again, I'm too lazy to write about running so I'll just dump a lot of pictures on you and call it a post. 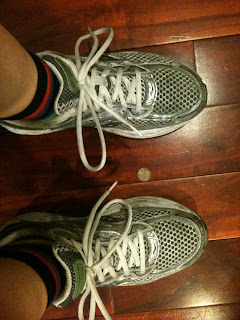 If you look closely, you'll see that my shoes have "Tracy Tracy Tracy" written on each of the toe boxes. I have two pairs of identical shoes with vastly different mileage on them, so I wrote my name on the older pair to keep me from getting confused.

What do you think about injinji socks? I guess I like them well enough, but I won't seek out a new pair once these are gone.

Also, the penny is there on the floor for scale. NOT because I'm lazy and my house is a mess and there is random change on the floor. That would be totally gross. 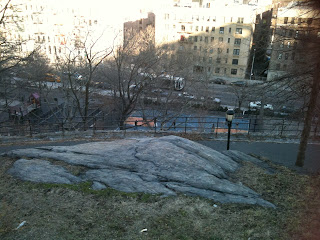 This is a rocky promenade in St. Nicholas Park where I once saw two kids in flagrante. Remember kids: just because no one walking BELOW you can see what you're doing, that doesn't mean that people walking ABOVE you can't see you. It just furthered proved my long-standing theory, which is that the people you see naked in public are never the people you want to see naked in public. 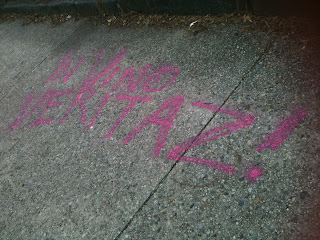 I never took Latin. The dead languages I've studied (Sumerian, Akkadian, and Egyptian) were all nearly obsolete by the time Latin rolled in, but I think there might be a spelling error in here. 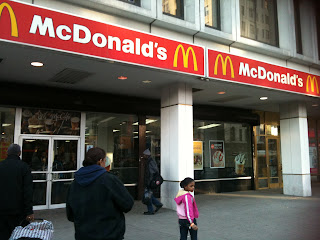 125th Street was full of people and not very good for running. The McDonald's has Shamrock Shakes. I didn't stop for one. (I'm strangely proud of this.) 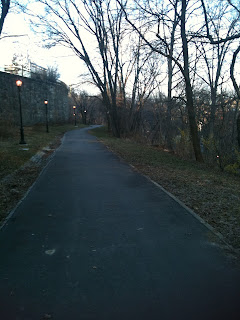 On the way home, I decided to run through St. Nicholas Park. It was empty, and getting dark. And I took the road less traveled. Miles to go before I sleep. Or something.

Bonus 9th grade English question: does that poem express remorse, quiet satisfaction, or both? Or neither? (The Road Not Taken, not Stopping by Woods on a Snowy Evening)

Even though it's barely two blocks from my apartment, I rarely run through the park. Shortly after I moved in to my neighborhood, a recent college grad disappeared while running through the park. That made me leery about running through the park alone. Not because I was afraid for my safety, mind you. Her story ended happily - well, as happily as dissociative fugue can get, which is to say that she's alive today and she didn't end up chopped up in a dumpster.

I wasn't afraid for my safety. I was stunned and saddened by the realization that I was no longer a young girl. If I went missing, it wouldn't be a tragic story about a girl, plucked from youth, a life cut short. I'm - gasp - in my 30s. 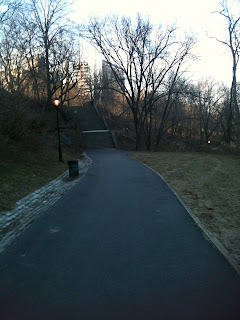 Oh, also? I don't run in the park because there are stairs. Loads of them.
Posted by T at 8:08 AM