On Sunday morning, I got my lazy self together and headed up to Van Cortlandt Park for the latest in the Holiday Marathons. Basically, on every major holiday since Thanksgiving, a group of dedicated volunteers have sponsored a free trail marathon (or half, or 6.5m race) in the Bronx. I'd missed all of them to date, either being out of town or out of shape or otherwise engaged.  But not this week! I made plans to meet up with a few friends (including Mz. Duffy,* my friends Renee and Mike, and Aron - who has recently begun blogging himself) to run the half.

Well, the road to hell is paved with good intentions, isn't it. I had the best of intentions, and by the end of the day I was in hell. I'll explain more about why that is tomorrow, but for now, I'll just tell you a bit about the race.

It was small. And free! And there was a guy dressed as the Easter Bunny!

And better yet... there was Scott Jurek. Let me tell you something: Scott Jurek is hot. He totally is. I'm not embarrassed to say that. I'm only slightly ashamed to admit that when we saw him arrive, I jumped up excitedly like a little girl. I wasn't the only one, though, and he was pretty quickly mobbed with a crowd of runner women.

10:15ish and we were off. If you're wondering about the course, Aron has a few photos up on his flickr account that can give you some idea of it, as do the race directors on their website. It was largely flat. There were some hills toward the beginning and the last couple miles (of the 6.5m loops) were rolling. The trails were not at all technical - some paved, some loose gravel, nothing off-road. The only aid was at the start/finish, so every 6.5m if you were doing the full marathon. Large parts of the course were quiet and serene, although the parts that run along a highway had the ambient noise of, well, a highway.

Lovely course. Hot day. Crap run. It started solidly, running leisurely with Aron and catching up on his recent (first!) marathon. Around mile 3 or so, Mike joined us and we ran together for a bit. By mile 4, I had given myself permission to only do one lap. By mile 5, I was running on my own. Mike and Aron lost me on some uphills, and I never caught up with them. (You can go ahead and read between the lines of Aron's race report that I'm basically a crap friend who let him down by not running on - but I would have held him back more had I tried to continue.)

The good part of being the last of your friends to finish is having Renee there to bang a gong when you finish:

Even if you finish with the stupidest look ever made on your face. Seriously, can anyone explain to me what I'm doing here? 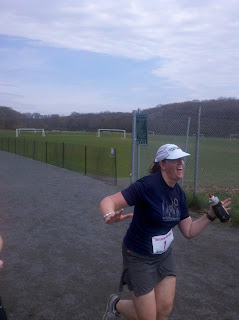 Afterwards, I was wiped. Renee and I did an extra 3m, but it was kind of a wash. I was quite lightheaded and frankly, bummed that I'd backed off the half marathon. Very unhappy. Why couldn't I have just accepted that it was a fun run and gone with it? Why did I have to beat myself up? Questions for the ages... or for tomorrow, at least.

*Somehow I never met up with Mz. Duffy, inexplicably. I'm not really sure how I missed her!