Here you go. Here it is. Finally. Incontrovertible. Here is why you can't rely solely on your Garmin: 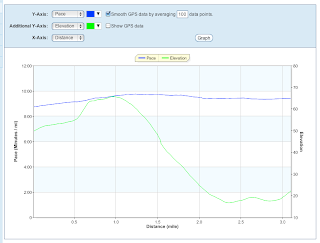 Out-and-back course. On a runway. Start was the same as the finish. Turn around at the 1.55m. And yet I somehow ran a pretty solid downhill on the way back, and I finished at a lower elevation than I started. Fantastical!

Now, I know that when you look closely, we're only talking about a change in elevation of ~40', but let me tell you: it wasn't there. There was no change in elevation. I'm not going to rail on how many people rely on their Garmins for distance calculations instead of trusting the race directors or the certified course. Listen up, and then we'll let it drop: due to how the Garmin works (think "magic travels between the sky and your wrist"), it is not always wholly accurate. 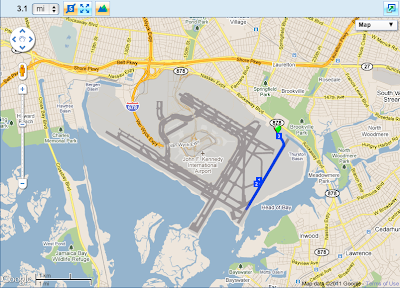 I have a thing about planes. I travel somewhere between "recreationally" and "frequently," and I hate it. I hate it. I hate the security theater involved in removing your shoes as TSA gropes you; I hate the turbulence; I hate how ghetto flying has become.
So naturally when I heard about a race on a runway, I had to sign up.

The race itself was exactly what you'd expect, namely a straight out and back, perfectly flat course. We registered in JFK's "Building 14," located in a back section of the airport that most of us have probably never seen before. After that, they bused us to the start, which was (as you see) on a runway on the outskirts of the airport. The race had a small town feel to it, which had both pros (small field!) and cons (the start time was more 9:08 than 9am; there were loads of walkers with strollers and jeans).

Yes, there were planes taking off and landing while we were there, but they never felt close. We couldn't exactly wave at the passengers, and I personally never even saw landing gear. The race might maybe have been more fun if the runway had been in use. (Just kidding!) But the runway was well used, as evidenced by the tar that coated it and caused one's feet to stick ever-so-slightly.

My race wasn't the best. The day was cooler than expected and I was even more tired and sluggish than I'd been Saturday morning for my longer run. I went out too fast, finishing the first mile in almost 9 minutes flat, and then staggered through the next 2.1 for a 29:09 finish (watch time - still haven't seen official finish times). I know I'm not in great shape, but a 28:xx (at least) was within reach, and I was too tired to achieve it. Sweaty, I got back on the bus and drove home, where I promptly passed out on the couch for a much-needed nap. 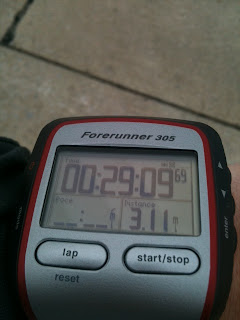 For another take on this same race, read E's race report about her age group win and how she met Miss Liberty, a local beauty queen.
Posted by T at 7:27 AM