Remember last year, when I ran the North Face Endurance Challenge Bear Mountain Half? This year, I returned to the scene of the crime - not as a participant, but as a volunteer.

Specifically, I helped to man the 27.7m aid station on the 50 mile course. 50 miles of technical trail running. Almost - but not quite - two marathons.

I know for some of you that's no big deal (you freaky people call those 50m run days "Saturday"), but for the rest of us, let's give it some thought. To put things in perspective, the winner finished in 7.5 hours. Nikki Kimball, the North Face sponsored athlete and competitive trail runner, finished in 9.5 hours.

So late last week when I saw a tweet from a friend saying she needed more volunteers, I told her I might be interested and I'd let her know. Shortly after I got an email from her confirming my participation - sneaky on her part, but, it worked. I needed the push. I wanted to use this to get inspired, but not too inspired. And I did! I loved the volunteering, and I can officially say that I have no desire to run a 50m trail ultra. Ever.

For those of you who've never seen one, ultras are slightly different. Especially trail ultras. For one thing, the people are hardier. (And by "hardier," you can assume I mean "crazier.") For another thing, the aid stations are better. Way better.

Check out our spread: 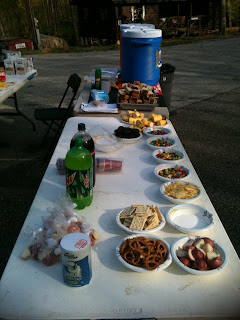 We had: flat coke and mountain dew, salt, pretzels, saltines, bananas, jelly beans, brownie bites, boiled potatoes, potato chips, m&ms, peanut butter sandwiches, Gu Brew, gu, gu roctane, water, ice, and a giant vat of chicken broth heated over a propane stove that I kept trying to offer to people but they didn't seem to want it. THEIR LOSS - chicken broth during/after a race is phenomenal (but I'd like to know which of the race directors bought the low sodium broth, I assume by accident).

And peanut butter and jelly sandwiches! Lovingly made by myself and E: 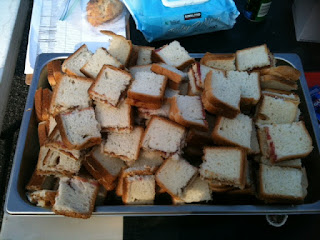 Yes, this did make me briefly contemplate taking up trail ultras. It may or may not be true that during a college when my stepmother worked for United, I used to fly for the free food. The airline industry killed that free meal plan, the cheap bastards. 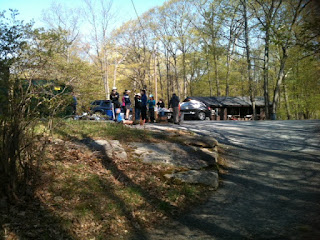 Then I realized, Screw that, Tracy. Run the half again next year. All the scenery but infinitely less pain.

It also helped that our aid station, set up at a camp with little cabins that were closed up for the winter, kind of had that horror-movie-hide-the-bodies-here vibe going on: 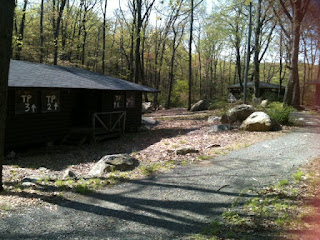 The work was straightforward and kept us busy: we noted the number of each runner who came by so that our team captain could record at roughly what time they passed through; we got their drop bag for them so they could change their shoes, eat their weird foods, apply more body glide; we helped them refill their water bottles or got them food.

The excitement - which was also the sole aggravation of the day - came at the end, when a runner went missing. Runner #48 was the last one to leave the previous aid station, and he didn't show up at our aid station. So we waited. And waited. And waited. After two hours, it seemed like he wasn't coming: either he must have left the course, or something had happened to him. So, out went search and rescue and their adorable german shepherd: 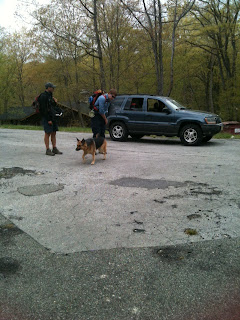 Let me tell you, that dog was excited to be put to work. Of course, it was for naught as the search and rescue team came across the sweeper (taking the trail markers down and cleaning off the course) a few miles in. No sign of runner #48.

At that point, our day was done. All that was left was to go to the finish line and have our free lunch at the post-race barbecue. They had a good spread of food, including the most delectable looking cake brownies I'd ever seen. E got one, and when I asked for one, the server said, "Actually, I'm not supposed to give you one. They're only for runners. I'm not going to take hers back, but you didn't do anything special, so you're not supposed to get them." Let me tell you... suddenly I saw my day flash before my eyes. I didn't do anything special?? Waking up at 4:45 to leave by 5:30. Making two loaves of pb&j sandwiches - and cutting them. Helping people with their skinned knees and bloody nipples and salt-crusted faces. Before I could jump the table to grab my own brownie, E said, "This one is really big. We can share it." Phew.
___________________
Just in case you notice anything, I may take the next few days off from the blog. I haven't run in nearly a week and I'm ready to try again, but until I have a good solid run, it's not really helping me to write about it. Don't worry - I'll be back before you can miss me!
Posted by T at 8:29 AM