News from the world of running

First: If you haven't already (or hell, even if you have), please go and vote in my poll from Friday. Thank you to everyone who has voted and has offered amazing comments. I'm weighing them all carefully, although (as promised) I'll go with the majority. As of right now that means I'm maybe running the race.

Second: Drew Carey ran a half marathon yesterday in 1:58. Props to him for his weight loss and running success. If you're looking for fat Drew Carey, he's barely recognizable these days, no? Related: he's evidently pro-headphones. 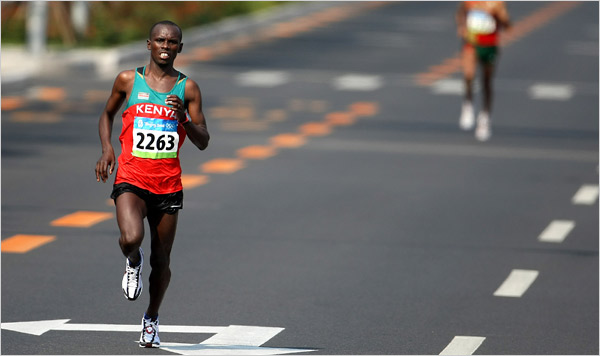 Finally: Sammy Wanjiru has died. At 24. Terrible. By all reports as I'm typing this, he killed himself by jumping off a balcony, possibly as an accident after a domestic incident. Please - let's not stigmatize suicide anymore than it already is by saying that he "fell off a balcony." He killed himself. Obviously we'll never know why, but what a devastating end to the life of such an amazing runner. Shortly after an amazing race at Chicago, he was brought up on charges of threatening to kill his wife. Whether this was true or whether, as he claimed, it was not true, it hints to some serious trouble in his life.
Posted by T at 8:11 AM