What did I do this weekend?


-lost a(nother) toenail running;
-ate a brat - not a hot dog - at the end of a race;
-got attacked by stinging nettles mid-race;
-got a nice orange tech shirt for a race, and a pint glass at the end;
-chafed BOTH underarms (how does one do that, even?);

-visited a far-off, never-before seen part of a city that I consider home - that being, of course, Pennypack Park in Philadelphia;
-had an amazing time.

That's right: I didn't run the Brooklyn Half Marathon after all. 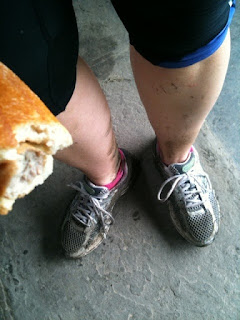 I could tell you the long story, but really the short story is enough: Friday, I realized that the idea of the race was stressing me out. Way too much. Getting to Brooklyn, running the race, getting home... I was just dreading the whole entire thing. I tried to explain to my sister how I had to run it because I'd posted a poll. She thought it was hilarious that I was trusting my life decisions to a flukey poll that dropped half its votes.

(She also had a birthday on Rapture Day Saturday. Happy birthday, Mandy!)

And then, well, there was also the race I was signed up to do on Sunday, in Philly: the Dirty German 25k. Tell the truth: how many of you would have changed your vote if you'd known I was planning on doing another race on Sunday?

So I stayed in Manhattan and slept 10 hours Friday night. No regrets. And more on the trail race tomorrow.
Posted by T at 8:10 AM