First off, Brooke made more of her hilarious photoshopped running products. Please go to her blog and check them out. And imagine me laughing hysterically as I look at them.

I had kind of a funny experience on Sunday. I suspect you've all had this experience, too. And I really, really don't understand it.

To set the scene: I spent Saturday out of town doing something stupid. I'll tell you more about it tomorrow, but in the meantime here's a teaser photo: 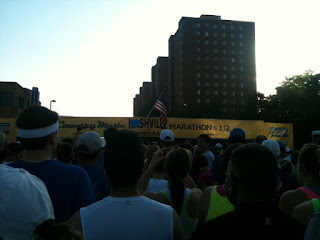 Yep. I did that. And I shouldn't have. But more on that tomorrow.

But anyway, Sunday afternoon I felt like I should go for a short little jog. I was taking it easy, running some and walking some while having a pathetic conversation with a friend - the drawn out kind that can only be had via text message. It was a nice day and I was enjoying just being outside.

UNTIL. Until I got passed.


Basically, point being, I kinda don't care if you pass me. I'm not going to make you a target and ruin my leisurely recovery run to chase after you.

BUT. Sunday. I'm walking and sending a text message, and this girl comes around me and passes me. Cool. A few seconds later, I start running again and it quickly becomes obvious I'm going to pass her. Okay, no problem. Except that this launches a giant game of leapfrog. For over a mile. Every time I pass her, she speeds up to pass me. And then she slows down, because she can't maintain my (SUPER SUPER SLOW) pace. So I pass her again. Finally, she tears off. I can hear her heavy breathing. I can see that she's having difficulty maintaining the pace. It was all just so uncomfortable that I took a walk break and let her have the lead.

Why on earth? I know this behavior isn't uncommon, but I don't get it. Yes, woman in black cotton, you beat me. Relish that victory - you totally beat a tired girl who was run/walking the day after a half-marathon. You're a badass speed demon.
Posted by T at 8:22 AM