When you think of Illinois, do you expect it to look something like this? 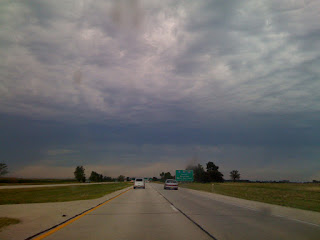 If so, you're not that far off. That's an actual picture I took out the car window while driving in Illinois.
Then why was the race I did on Sunday so freaking hilly? While others of my internet running friends were doing the Mini 10k in New York, I was running a 10m race in Downers Grove, IL.
My sister had told me that there were some hills. "Nothing too bad," she said. "That's where I set my PR."
I first got an idea that it might actually be bad on Saturday, when we mentioned to a friend of hers that we were doing the race the next day. "Oh, man," she said. "I'm never doing that race again. It's terrible."
And it kind of was. As we were driving into Downers Grove, the hills began to grow ominously. My sister kind of giggled and said, "I think probably the hills are more like roller coasters. It's pretty bad."
Personally, I would put the hills somewhere between "gently rolling" and "punishing."
The event had both a 5m and 10m race, organized on a two-loop course. With only about 700 participants, and only 200 of these in the 10m race, the second loop was fairly desolate. The course ran through the streets of Downers Grove - mostly shady, and actually with some substantial flat bits - and most of the streets were closed off. There were volunteers at every turn (to the point that I kind of felt sorry for how many of them there were!), police at every intersection, and more than ample water stations.
And the Buffalo Wild Wings mascot at the finish. (He's on the left. I'm on the right.)

I'm a little bit grossed out by how badly my shoulders evidently sweat. Nasty.

Overall, this was a surprisingly fast race, due largely to the participants. I don't mean it was a fast course - I mean that after we finished the first loop and began the second, spot on at 10:30 pace, we were amongst the very last of the runners. We didn't finish last, but I'll bet there were fewer than 15 people still behind us. (The official results aren't up yet, so I'm not sure.)

I wanted to take it slowly, and we did - mostly. I was extremely tight from Saturday's 5k, and the first couple of miles were painful. But we settled into a groove, walked through the water stations, eavesdropped on other runners' conversations, coughed at the pollen, and the miles clicked off. I noticed as the first loop ended that we were mighty close to my 10m PR pace, but I didn't give it a second thought. Surely we would be slowing down in the second half. By mile 8, we were still on track. By mile 9.5, when we began a sprint to the finish, I knew it would be close and a PR was within sight.

Completely unexpectedly, I finished just under 1:45 - over a minute faster than my PR. I hadn't even mentioned to my sister that it was a possibility, because I didn't want to be racing. I got another printout of my results: 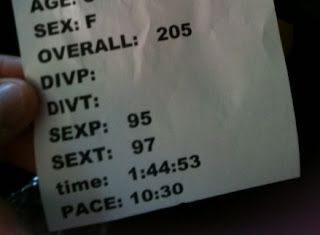 Inexplicably, my sister's watch and mine both had our final times 20 seconds faster. On Saturday, the results were 20 seconds fast. On Sunday, 20 seconds slow. Still a PR. Still all good.
Posted by T at 7:41 AM