And if you're like me (and I rather hope you're not), you sang Dar Williams' "The Christians and the Pagans" all day yesterday (that song can get annoying, can't it?) to honor the solstice.

Or maybe you're Swedish, and you ate crayfish and sang songs about frogs (I have heard this sung and seen it danced live and it's phenomenal) while drinking schnapps.

But if you're me, you left the house at 6:15am yesterday to head to the scariest place in all of New York City: Times Square. You see, there was free yoga, sponsored by Lucy! And, as you can read in this article that Sofia brought to my attention, I like things that are free. I like them a lot. Click on the link; it will take you two seconds. (The reporter was clearly taken aback that money was my answer to the "what brings you here" question.) I'm profiled at the bottom, "Tracy from Harlem."

Okay: I'm not going to lie. I'd love to say that yoga on the solstice was an affirming life experience and a great way to start my day and that I left it with a renewed sense of peace and tranquility. Not so much. I was pretty distracted during the class and found it hard to focus. I felt like a tourist attraction as thousands of tourists clamored around us to take pictures of the yoga class and my thoughts were more on the tempo run I had planned for last night* rather than on my downward dog (I cannot be the only yogi who despises downward dog). But luckily the Well + Good photographer didn't catch me texting... not that I would ever do that during a yoga practice... 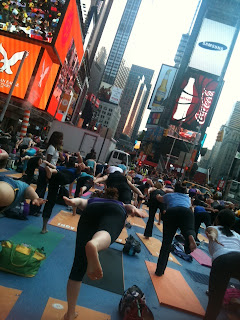 Still, it was a cool experience and I got a free yoga mat, some febreze, a bag, a bottle of herb-infused water, and a nifty smug feeling.

*the tempo run blew up. truly miserable. I was very upset after. I'm (mostly) over it now. next week is a new week.
Posted by T at 7:53 AM