Miscellaneous #1: Remember my life mantra: nobody ever wants to be that guy. No matter who that guy is in your situation, don't be that guy.

At races, that guy is the one - and s/he is always there - who says cocky things at the start like, "How do these hills compare to Boston?" Or just plain obnoxious things like, "Huh. Looks like a slow crowd judging from what I see back here. I really belong closer to the start." It's not so much what s/he says as the tone of voice.

There's a fine line between being proud and being that guy. For instance, if I ever do an Ironman (which I won't, since I can't swim) you bet your life I'd wear the hat to every single event I could. It would get weird: "Tracy, please, please take off the hat! It's my wedding and I requested formal wear!" "But what if someone there doesn't realize I did an Ironman! The hat is so much subtler than having to say it! Besides, I'm wearing the clean hat."
____________________
Miscellaneous #2: I had an anxiety dream the other night about the NYCM. In the dream, it was November, the morning of the race, and I woke up and was getting ready when I realized I didn't have my bib. No problem, I told myself, I'd do race-day packet pick-up. Then I realized... there was no same-day bib pick-up. I'd missed the expo. It was too late. So I couldn't run. (And in my dream I'd just come off of an amazing training season, too.)

Obviously my first thought upon waking was, "Crap! That means I have to hurry and do the 9+1 so that I can register for the race next year, too, just in case!"
______________________
Miscellaneous #3: What up with all the orange shirts this year? I was talking to some friends a few weeks ago, and we were saying how it's quite obvious what fitness fashion's colors of the season are. Evidently this year it's orange. 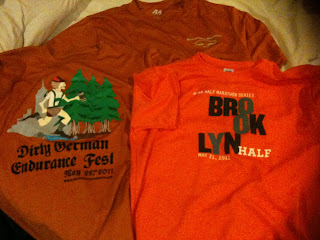 (And no, don't worry. I won't wear the Brooklyn tee since I didn't run the race. Does anyone want it? Otherwise it goes to goodwill. Size small.)
Posted by T at 7:45 AM