Montreal! And also I ran against HPV. Or le VPH, as they say.

Attention Canadian readers: I apologize in advance for anything offensive to Canadians that I might say in this post. You know I love you guys and your OTC drugs.

Sometimes I have some really, really stupid ideas. Take for instance, this genius idea: "I want to go to Montreal. There is a train that runs to Montreal! It's not that expensive. But it takes 11 hours. I'll totally do it!!!"

Memorial Day weekend, I headed up to the 51st state in order to buy some ketchup flavored potato chips and apple cider take a minibreak with a good friend. I'd noticed that there was a race that weekend, so I figured it would work out well: I'd get a few miles in (run to the site of the race on the Île-Ste-Hélène and back) while Adrienne slept.

But first, Friday night, some food to prepare for a long run - of course, poutine. I loved it. Adrienne hated it. I think she was taken aback that the gravy came out of a giant can. I have a thing for junk food, though. The grosser, the better.

Saturday morning, I headed out to the race site. I plotted a straight forward course from the hotel where I was staying over the Jacques Cartier Bridge to the island. It was gloomy and overcast, and about a mile into my run it began raining. Ah, well. At least it was cool and not hot. 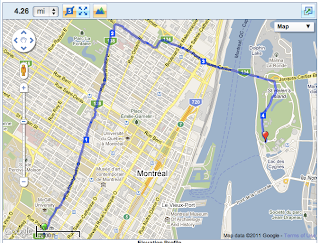 I have a love-hate relationship with Canadians. I love that they're all so nice. And yet I hate that they're just like really polite Americans, but not. Point in case: as I approached the bridge, I could see the traffic flowing onto the bridge but I couldn't quite make out the pedestrian walkway. I saw a man leave his house on foot, so I stopped him to ask how to cross the bridge. After giving me directions, he said, "Oh, you're going to love crossing the bridge. I did that once. You're going to love it." He was so earnest that it just made my heart melt! (Sorry though, dude, it's just a bridge.)

The race itself was kind of, well, it just was. It was a two-loop course (for a 5k), and there were only about 50 people there. I was withholding this race report in part out of hope that I could leave out that last fact about low numbers and only post the statistics, hopefully wowing you all with a single digit age-group place... but the Running Room hasn't published the results yet.

More intriguing than the race itself, though, was all the pomp surrounding it. For one thing, they had breakdancers. A troupe of breakdancers to perform for the small group of us. They also had a musical guest, a performer named Shy-Anne who was nominated for a Juno Award in the aboriginal category. (If you don't speak Canadian, the Juno Awards are like the Grammies... but not. Just like Canadian Thanksgiving or Canada Day or the other cute, quaint things they've copied from us they share with us.) I also got a race kit with a full bottle of Garnier Frizz Control.

Also in the race kit? This:

Yes, it's a ruler with different forms of birth control acted out by computer mice on it. But the uneven shape of the ruler took me a second until I realized... it's shaped like a penis! Yes, yes it is. How odd.

So, I ran 11m total on Saturday and 4 on the treadmill on Sunday (it rained again). There was, of course, also some of this:

Actually, there wasn't. I wanted a bear claw but I didn't get it. Too busy stuffing my face with crêpes to pause for a donut.
Posted by T at 7:43 AM