I have to warn you: as I'm typing this up, I am freaking exhausted. Sunday morning, the Van Cortlandt Track Club hurt me. They hurt me so good. Like they often do.

6.2 brutal miles of totally crazy-pants hills. All run on pavement through the lovely streets of Riverdale in the Bronx. Take a look at the elevation profile (be polite and try not to notice the change in my pace that accompanies each change in elevation): 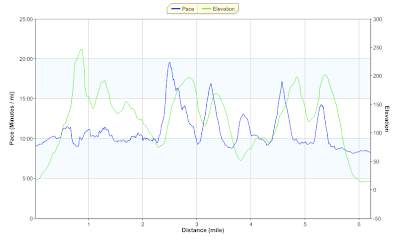 Anyway, to back it up a bit. I woke up early (for me) on Sunday morning, around 7am. And I desperately did not want to run. I stayed up too late, out for drinks Saturday night, and I was tired. My mileage has been ever-so-slowly creeping up, too, and it's starting to take a massive toll on my energy. I just wanted more sleep. I procrastinated for a bit, then finally decided it was time to leave. Secretly I hoped that maybe my metro card had expired so I would have an excuse to go home. Or that I'd be too late and would miss the race start and have an excuse to go home. Alas, I made it to the start and picked up my bib and shirt with at least 10 minutes to spare.

The VCTC has their race organization down cold. They run a great race. Their directions before the race were clear, and when the bus pulled up to the stop, a team member got on the bus to make sure no one from the race was on the bus. He handed me a map with directions to the race start (and there were signs leading the way - it was maybe 500m through city streets). Along the course, they had cheerful and positive volunteers at every intersection.

The course was different from last year's noticeably in that the start was in a new location, much more convenient and closer to public transportation. I can't speak directly to changes in the course from last year to this, but it was challenging. Last year I described it as "THE hardest race I've ever done, bar none, with crazy hills. Rough day, rough race." I would say that it was at least comparable this year. Maybe even harder. Then again, I would also say that the hills (the race was an out and back) grew larger after the turn around.


I've said it before and I'll say it again and again and again: I have a thing for hills with names. If the hill has a name, I want nothing to do with it. Well, these hills had names. My favorite? 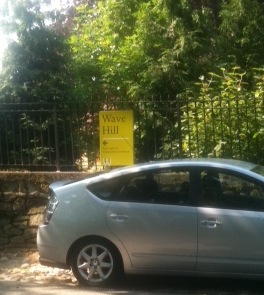 Yes, Wave Hill. I've given it some thought, and I think "Wave Hill" is one of the worst things you can name a hill. Other hills with generic names like "Bertha" are just large. But Wave Hill... you know that bitch it going to be undulating. And that's terrible.

If you do this race next year, don't make the same rookie mistake I did and assume that it finishes at the same place it started. If you do that, you will be upset to realize that you're only at the 6m mark by the time you get back to the start. I couldn't let up, though, and did the last .2m in roughly my 400m repeat pace.


How did I do? My first couple of miles were solid, but by the halfway point I was walking up the worst of the hills. Still, I finished in 1:05:51, which is a full five minutes faster than last year and (intriguingly) only about 20 seconds shy of my most/only recent 10k - that right there tells me I need to run more 10ks.

I'm seriously contemplating joining the VCTC. It dawned on me about mile 4 that, if I joined, I could volunteer at their races and not actually have to run them. I think my plan is genius! I mean, technically there's no reason I have to run them now, but...
Posted by T at 7:52 AM