Being home in Chicago means two things: eating way too much and running with my family.
This trip has been no exception.
First up, 4m on the treadmill Thursday night next to my brother. (He was walking.)
Next up, 5k on Saturday with my sister.
Ever since I blew off wisely decided not to run the Brooklyn Half Marathon, I've wanted a longer race to kick off the summer and see where I'm at pace-wise before I start marathon training. Luckily, there was a half marathon in Chicago that coincided with my week here with family. But there was also a 5k that started down the block from my sister's apartment. Why not both?
(Now, it ended up being the case that I didn't actually run the half. We decided instead to do a 10m race that was closer and much, much cheaper. More on that tomorrow.)
My thought was: take the 5k easy, run the longer race the next day hard. My sister had other plans, though. She thought I should try for a 5k PR and then take the longer run easy. (It turns out that was because she'd knowingly picked a super hilly race for the 10m the next day. More on that tomorrow.)
After a .7m warm up to the start, we lined up in our proper place amongst the other 7 minute milers. Okay, okay, so I'm not actually a 7 minute miler. But this was a small local race, and most of the racers had no idea where they belonged at the start. We were tucked in amongst people wearing jeans and pushing baby strollers, so I didn't feel bad about the slight start pace dishonesty.
Our goal: even 9:15s for the first 2.5 and then a slightly faster last 800 to finish right around 28:30 and a nice PR. That didn't happen, as you can see: 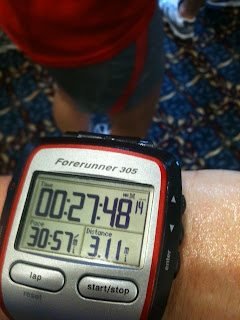 Instead, our first mile was 8:43. Oooooops. "I swear my Garmin said 9:15s all along!" said my sister. "Um, maybe that was the uphills. Sorry!" Love the visible sweat on my wrist there. Not gross at all. The humidity was high. (Actually that's really gross.)

This is one of the few races that I can say I truly raced, as in, I was absolutely done at the end. We did slow down some - our second and third miles were just slightly over 9 minute miles - but I still felt completely spent at the end. I took a bottle of water from a volunteer, contemplated whether I was losing my vision and/or hearing because everything kind of just shut off for a second, and then sat down on the grass. 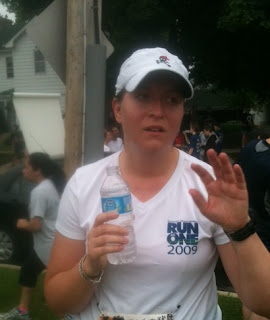 At the finish, they had the coolest thing: they had a little computer where you entered your bib number and got an immediate printout of your race results. Maybe this is commonplace where you all race, but I'd never seen it before. 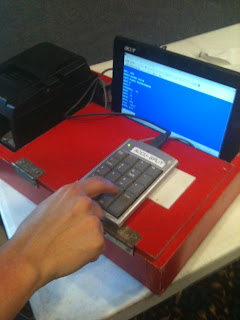 But wait, what's that? 27:27? That's not how long it took me, but I'll take it!! (Later the announcer said that there was an error and that all recorded times were 23 seconds too slow. STILL. I HAVE THE PHOTOGRAPHIC PROOF. I AM WAY FAST.)

Also, please note that I was 10th in my division. For reals. Small races ROCK. 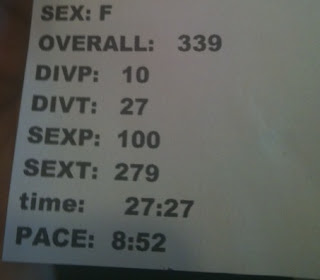 After the race, we ran 2m as a cool down with my sister's friend Julie. Despite the fact that she'd just run the race as a tempo run at 6:15 pace (which she said was "hard," a lot like I'd describe 8:57, for the record), she still ran her cool down at a leisurely 10:30 pace with me and didn't complain about it being too slow. In other words, I love Julie.

We stayed for the awards ceremony and chose not to take any 5-hour energy. I mean, I wouldn't want to mess up their display. 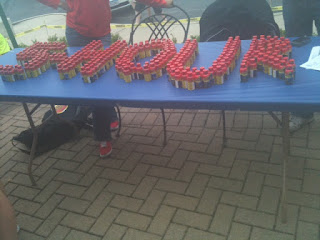 Me and my pacer/sister at the finish. Oddly enough, I'm only about an inch taller than she is in real life. 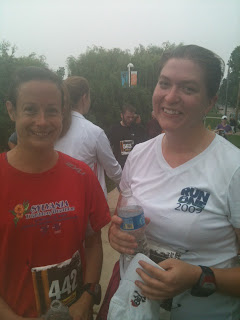 All in all: a PR by nearly a minute. Maybe this "run more to get faster" thing really works. Too early to tell for sure.
Posted by T at 7:41 AM