Living in Harlem, the mail takes as long as the subway sometimes to get up here. That's why I only yesterday received my August 2011 issue of Runner's World, featuring a Running Skirt on the cover. Not just any running skirt, but a pink and orange argyle running skirt. This skirt says, "Pay attention to me!!" (In fact, I happen to know someone who not only owns this skirt, but who looks hotter in this skirt than the cover model does.) 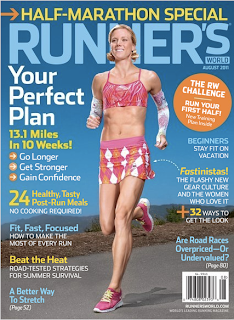 I'm sorry; did I subscribe to a fashion magazine by mistake while I wasn't paying attention? "32 ways to get the look" - are you serious? What's next: Sex tips for runners? "What kind of runner are you" quizzes? Mascara reviews?

I haven't really kept my feelings on Runner's World to myself. I read the magazine each month, but I think that it too often panders to the casual runner. I have no problem with casual runners - but running is a sport, it's a serious sport, and there is a line between encouraging casual runners to get out there and do it, and recycling the same tired tips over and over again and calling it content.

My take on this cover: who on earth wears a sportsbra with arm warmers? Granted if I had her abs I'd never wear a shirt, but still.

Specific to the "Fastonistas" article, here are things I learned:


Not even to mention how stupid and non-gender-specific these examples are. Arm warmers and compression socks as fashion statements? These are functional clothing first and foremost.

A three-page foldout in the middle of the article shows you how you can run! and shop! at the same time! in pretty colors!

I hope it goes without saying: I am not a fastanista. (I'm not an anything-nista, but that's another story).

But if you do want to talk about running fashion, let's address Galen Rupp's fashion choices:

I'll be no one has ever called him a stunner in that mask. (In case you didn't know, "stunner" stands for "stylish + running.")