My weak defense of why I *need* those Brooks

Ed (22 Jan 2012): I'm getting quite a few hits to my blog from people googling the Brooks Ravenna 3. What follows is a relatively boring post about how the Ravenna 3 seems to encourage a midfoot strike - for me - as compared to the motion control shoe I wear for longer runs (Saucony Omni). Personally, I love the Ravenna 3. I find it different from the Ravenna 2 (and this is completely non-scientific, and I no longer have the Ravenna 2 to compare side-by-side) in that the Ravenna 3 seems to have a slightly less prominent heel. It also seems quite durable - again, ymmv. I've put ~200m on mine at this point and the shoes feel springy and new still.

I have basically talked myself into getting the Brooks PureProject PureCadence. You know, the ones that yesterday I said I was in love with.

I'm a heel striker, I know this. And I've never truly experimented with minimalist shoes/barefoot running (unless you count wearing Nike Frees and Saucony Hattoris for casual wear as experimentation, but I call that "fashion"). When I briefly switched to the Nike LunarGlide, I got shin splints. Those shin splints didn't go away until I got rid of every shoe that was not the Saucony Omni.

Until... I got the Brooks Ravenna 3, and I fell in love with it. They call it a "guidance" shoe. I call it "slightly lighter weight, super squishy, and much more fun to run in."

The other day when I was putting the Ravennas on, I noticed a wear pattern that looked slightly unusual to my eye. Bear with me while I geek out for a few paragraphs here. I compared two shoes: one, the Ravenna 3, and the other, the Saucony Omni. Both shoes have almost exactly 150 miles on them (I usually get around 300 miles on a pair of shoes). Forgive me, as I realized too late that the photos would have been MUCH better had I used a better camera, in better lighting. 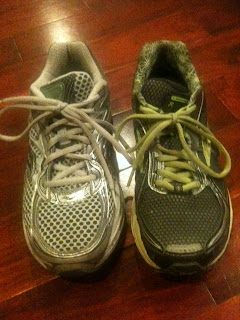 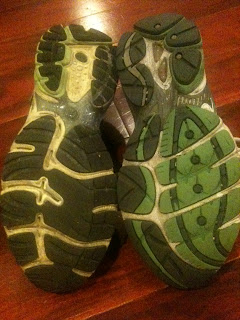 I'm used to a predictable wear pattern on my shoes. Specifically, the outer edge of the back of the sole of the shoe wears down noticeably on my shoes, as you can see on the Saucony: 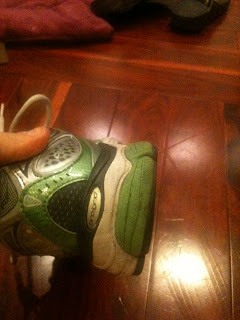 The Brooks, on the other hand, are not worn down like the Saucony: 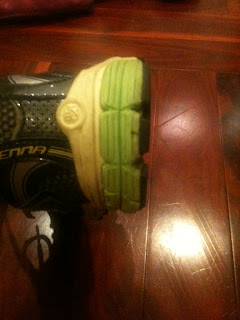 Here's a side-by-side comparison of the heels of the two shoes: 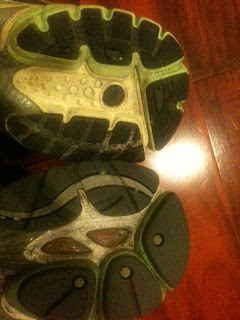 The heel of the Brooks (above in this photo) is barely worn - in sharp contrast with the Saucony (on the bottom), which shows nearly no wear. Where the Brooks are most obviously worn is in the midfoot: 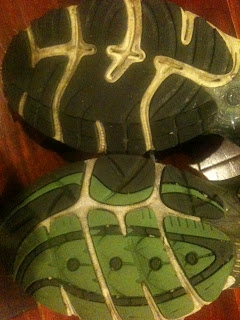 The Saucony is worn in the midfoot, too but not nearly as badly. The Brooks is really just flattened completely.

What does it all mean? Probably it has more to do with the construction of the shoe and with my mild overpronation than anything else. However, I'm using it as rationale for why it's okay for me to get a minimalist shoe that markets itself as a guidance shoe. (Come to me, PureCadence!).
Posted by T at 8:04 AM