I didn't run Yonkers. You all gave me great advice (most of which was "run it"), and I wanted to. I really wanted to. But then, I wanted to sleep in Sunday more, and it was glorious. What a perfect, wonderful day after an awesome night of sleep. Yonkers would have meant waking up around 5 to get the train; instead, I woke up hours later and ran 11.5m with Tara. We ran into Ali, and you should totally buy one of her I (heart) Sweat shirts if you haven't already. True: I wore mine today and got three compliments on it. Also true: one of those three was Ali, and only one of those three was potentially creepy (that one was not Ali).

Then, Sunday evening, I ran with Lance Armstrong. Well, sort of. I mean, I was there, Lance was there, and after an amazing and astounding 90 minute wait, we ran.


The organizers of the event had some problems, namely that Lance was flying into NYC and his plane was late (or so they told us, but only after the run started). In the meantime, we all just stood around, cold, acting like Lance Armstrong was worth waiting for.
Once Lance arrived with an entourage and loads of fanfare, we had a police escort to the West Side Highway. Sort of. They had told us to expect pace groups from 7 to 12 minute miles. I finished the 3.7m run with solid 10 minute miles and there were only two or three people behind me - and certainly no pacers. I saw the police escort for but a brief few seconds before I was on my own. (Not actually on my own: I had some lovely company in two new friends, Ellen and Juliana.)

I'll admit; I was irritated that Lance made me wait 90 minutes. I haven't waited that long for a brief celebrity sighting since the Spice Girls were in Chicago in 1998 and I stood outside to see them ride past in their bus (do the math and you'll discover that I was much too old to be chasing the Spice Girls in 1998). The organizers probably could have kept us better informed about the situation, but hey: free is free, and you get what you pay for.

Or more than what you pay for, as the case may be. The run ended at a club where we drank fancypants juice drinks while consuming tasty appetizers. They even gave us a shirt - and it was nice! Dri-fit with a cute logo of a running Empire State Building. 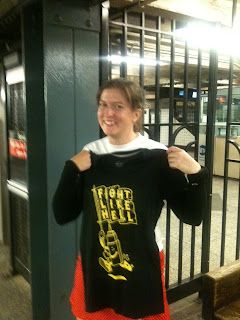 Oh, the irony. Listening to Lance Armstrong talk about diabetes prevention while I reach for my third coconut milk drink to wash down a slider, chicken fingers, and fried wontons. Happy birthday, Lance, and thanks for the party!
Posted by T at 7:56 AM