Foot issues: one gross, one not

I'll start with the non-gross issue so that those of you bothered by feet can opt out of my second foot-related topic.

According to runblogger, Saucony is slowly changing the drop on their 12mm shoes to an 8mm differential. As most of you know, that number refers to the difference in height between the forefoot and the heel of the shoe. Most of us, myself included, do our long runs (or all of our runs) in big, clunky shoes with a 12mm drop. With their elevated heel, these shoes foster a heel strike. However, lately the increase in minimalist footwear has meant that zero-drop shoes (or close to it) are becoming much more mainstream. If you didn't click the link, basically what Saucony's representatives said was that the 12mm figure wasn't based on any scientific evidence but was just one of those "because it's the way we've always done it" sorts of things. Their wear testers seem to like the lower heel.

This could be a game-changing move if other companies follow their lead.

I'll try it. But that won't surprise you since I'll try any fad. 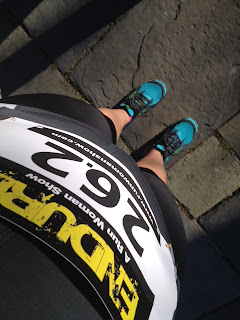 If you tell me you're shocked to see me in my new Brooks Pure Cadence, I will call you a liar.

Next, the gross part. A few days ago, I noticed that the toenail was loosening from the nail bed on the second toe on my left foot. (Turn back now if that sentence made you at all queasy; it will only get worse.) Yeah, yeah, yawn, common occurrence. Soon the cycle of (toenail) life will continue as the toenail falls off and then regrows itself again. I don't even have a left big toenail anymore because it fell off so often that it stopped growing back. So I did what I usually do in this situation, which is to trim off as much of the excess toenail as I can without cutting into anything.

Well. While I was walking around the other day, I noticed the toe was tender. I got home and I took my shoes and socks off and found that the toe was slightly pink. I kind of pressed on it a bit to see where it hurt and puss gushed out. Yep. Ingrown toenail. A few days before a marathon. I swear I didn't cut the nail too short and the skin was never broken (except obviously I must have and it was). I'm soaking it and using tons of neosporin and keeping my fingers crossed.

It's always something, isn't it?

And no, you don't want to see any pictures. It's just a pink toe at this point, anyway. An angry, mean, race-ruining pink toe.

I'm also dying of a cold and I've spent more time thinking about what to wear on Sunday than I have on, you know, like work and stuff. So yeah, it might be taper time.
Posted by T at 7:57 AM