Instead, on Saturday, I ran in honor of the Chicago Marathon.

My last year's Chicago Marathon t-shirt and a 312 showerbeer. Yes, it was a mid-day showerbeer. No, I don't have any shame. 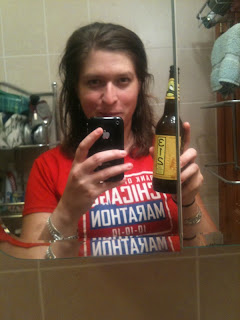 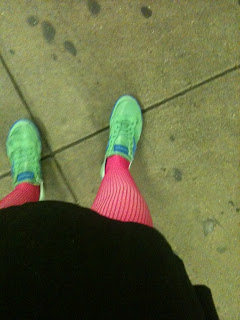 I was sporting some pretty high fashion post-run wear, though. Let me tell you! 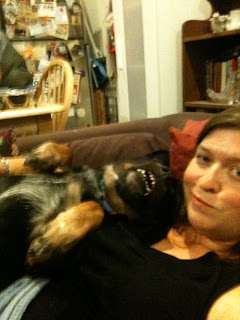 And I may have taken a really, really long nap with my dog. One of us had the sleep of her life. The other one of us thinks that her dog has bad breath. And is heavy.

You know who did run the Chicago Marathon, though? My sister. True story: she was pacing the US Women's Soccer Team. Hope Solo, Abby Wambach, Alex Morgan, and 13 contest-winning fundraisers from the general public all did the marathon as a relay for charity, and my sister was the chosen pacer. (She's the one below with the dark hair who is not wearing the requisite Nike shorts.)

They started right on the start line. With the elite runners. And they finished en masse. In the middle, they tried to ditch my sister. She was the only one going the full distance - each of the charity runners was only going about 2m. Thus, none of them needed water and didn't want to stop to let my sister get water. Finally she broke down and had to stop at a certain point, after which she lost them. So she Rosie Ruiz'd a couple of miles off the course to meet up with them at the end. (I hope she didn't take a medal, marathon cheater.)
Posted by T at 7:48 AM