On Thursday, Samantha asked for advice on the bridges. Specifically, is Queensborough as bad as everyone says?

Let me answer your question for you, Samantha: no. It's not as bad as everyone says.


Now, since my time on the Queensborough Bridge corresponded with my decision that the race was all "lalala, this is a fun run," I decided to put the question to my sister, too, to see what she thought. She ran her PR of 3:16 at NYCM in 2008, so she'd have the first-wave, competitive perspective on it.
Here's what my sister said: "sure, uhm, which mile was that at? :)"
Then she later clarified: 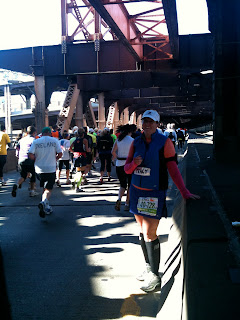 "By the time you get to the Queensborough Bridge, I think it is mile 15 so by then you are either having a great race or not.  When I ran NYC I did have a great race so I didn't think much of this bridge at all.  What I most remember about it was while actually running on it the air temperature seemed a little warmer and the atmosphere was stuffier in general. Exiting the bridge was an incredible experience, not only did you get to run down the decline but you are also greeted by thousands of spectators yelling and cheering!  It is a great feeling, they make it seem like they are cheering just for you!"
I agree with her. The thing most of us New Yorkers don't realize is that it's a totally different experience running the middle of the bridge (the car lanes, like you see in the photo of me at last year's race) than it is running the pedestrian lane that we rehearse and rehearse. I'm not going to lie and say that the incline is easier in the middle of the bridge, but I didn't feel it as acutely. It was such a different experience to suddenly be somewhere slightly enclosed (although not claustrophobically so).
Let me tell you what did suck, though: the Pulaski Bridge between Brooklyn and Queens. (This from a Chicagoan who will always love Casimir Pulaski for the gift of a day off that he gives Illinois schoolchildren every March.) On the course map this bridge looks tiny. In person, it looms before you like a very ugly ribbon in the sky high above you. You see it from a distance, you approach it slowly, and it climbs up and up and up and it sucks.
Worst of all, you get over the bridge, and you are only halfway done with the race.
So, see? Queensborough is no big deal. Now, in honor of the 59th St. Bridge, let's all sing some Simon and Garfunkel.

Also, a correction: In exchange for bridge advice from a speedster, my sister wanted me to point out that she was a "roving spectator" for me at the Chicago Marathon in 2009. (What she means is that she ran the last 6 miles with me.) This was a feat - she had already finished the marathon herself and turned around and came back to bring me in (at my pace that year? I can't say I was running). I'm not sure that counts as spectating, though...
Posted by T at 7:39 AM