Marine Corps Marathon. Or, as I like to call it, the People's (Republic of) Marathon.

Maybe the Marine Corps Marathon is called the People's Marathon because it doesn't offer prize money to elites. Or maybe it's a subtle comparison with China, huh? All I know is that when I pulled out the t-shirt, my friend's husband immediately drew the comparison and started laughing. 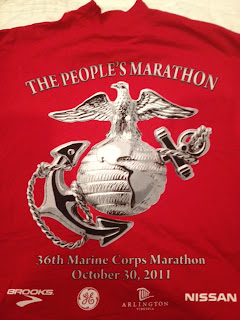 If our new communist race directors keep the price as low as it is (registration is less than $100), I'm good with it. I'm not really good with the cotton mock turtleneck, but with my registration savings I bought myself a swank t-shirt of my own choosing.

But don't worry about a risk of any actual communists. This guy at the start line was on the case:

The short story: I finished the race in 5:28. I was hoping for something much closer to 5 hours, but it didn't happen. I never crashed, I was just slow throughout the whole race. 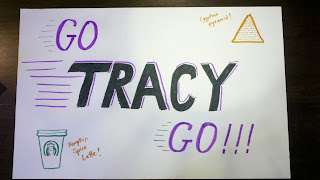 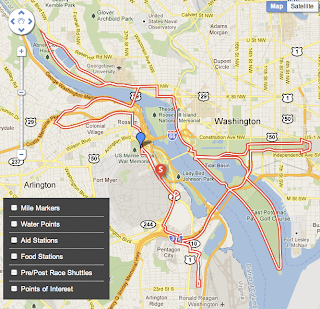 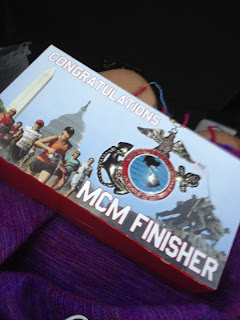 Do know, though, that the marines do everything at this race, including yelling out the time (in lieu of a clock) at the mile markers. Trying to figure out what "One hundred and thirty two minutes and forty-seven seconds!" meant pace-wise bought me an extra few minutes of distraction.

All in all, I would give the race itself an enthusiastic thumbs up. My race, I still need to think about that for a while. On one hand, it's the fastest marathon I've run since my blood clot a few years ago. On the other hand, I felt like I was capable of a 5 hour marathon and I was confident I would be sub-5:15. I need to give some thought to figuring out what happened and why I didn't get there.

And don't bother telling me I was close. Close only counts in horseshoes and hand grenades. 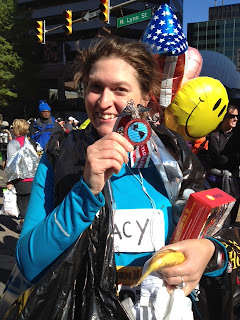 Still, it's a cool medal. The middle part (with the globe) spins around.

Hopefully I'll think about this quickly and come to some resolution, since my next marathon is in - gulp - five days?