So What it's Hot? Product Review

A few weeks ago, I got a message from one of my friends asking if I'd seen the "So What it's Hot" water bottle holder. "I think it's like the Snuggie for runners!" she said.

Oh, yes, I'd seen it. Their ads have been doing the twitter/facebook/viral bit, and for good reason. If you haven't already seen it, watch this:

Given that my love of the Snuggie is well known, as is my love of water, I knew immediately that I needed to try the SWIH. Therefore, I did something I've never done before and I shot the company an email asking if they would be willing to send me one to review. A few hours later I had a very nice email saying yes, and less than a week later I had two SWIH, size medium and large, one in pink and one in black. (Customer service: A+.) For reference, the pink is L and the black is M. We didn't really notice a significant difference between the sizes, although the medium was slightly too large to fit comfortably around my neck but fit perfectlyover my head. The velcro may have been aligned slightly differently between the two, as Tara's size L fit around her neck easily. That, or maybe I have a dainty little giraffe neck (<--not true). 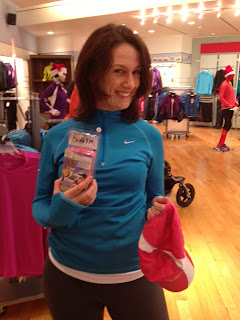 I recruited Tara to try the SWIH with me on a weeknight run in Central Park.

The product is simple: it's a stretchy band with a velcro fastening that wraps around your head. An elasticized pouch in the middle of the band holds a water bottle, enabling you to wear it a variety of ways: 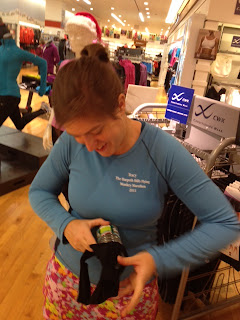 Given that it was only about 40 degrees when we ran, I didn't have a chance to test the SWIH with frozen water. I could see that being very pleasant in the summertime, and I will definitely do that for my easy runs next summer.

Overall, I'm mixed on the SWIH. To be entirely honest, I kind of expected the worst and was pleasantly surprised. I'm always looking for an alternative to a handheld bottle, but I'm not sure this will become my go-to. I will use it again; however, I might suggest it for something lower-impact than running. I would use this in a second over a camelbak on a short hike, for instance.


But you know what? We had fun trying it. Loads of fun. If you're looking for a nice, cheap stocking stuffer or grab bag gift for the runner in your life, why not?
Posted by T at 11:27 AM