This is what it's all about.

Last week, I was moaning about goals. If you could read between the lines, which you can because both of you readers are very very bright, you could sense that I was - I don't know, not exactly missing motivation so much as kind of floundering about what to do next. I'm goal-less, and while that's okay, I'm also impatient.

I got some excellent advice in the comments, including M's suggestion that I work on... well, on doing nothing. Sweaty Kid also had a suggestion: more trail running. So, I tried that.


On Sunday, I met Illana in a place with a funny name to run on a trail with a burly name. That's how I described it to a friend, and I stand behind my words - we met at the Mamaroneck train station (funny name) to run the Leatherstocking Trail (burly name). And it was awesome. 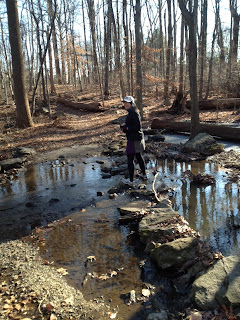 That photo is about .02 seconds after I stepped in the water accidentally and screamed out loads of profanities. It was cold. Coldcoldcold. This is also my new facebook profile photo, since it's rare that I look anything other than completely strange while in running clothes.


Illana is training for things that are much more hardcore than I am, including a trail 50k this spring. Me, I'm chilling. Although I wanted to throw up more than a little bit at the finish line of Saturday's race, I actually didn't feel that terrible by Saturday afternoon. Sunday was all about easy running, though. Illana let me lead and set the pace, and I set it sloooooow. My Garmin died just as our run began, and hers was recording only the time (not the pace/distance). This was fine by me. 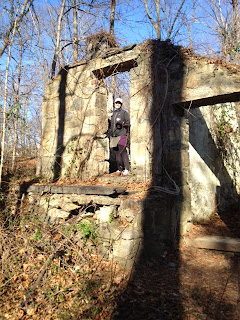 There was an element of Blair Witch to the whole thing - mostly because you can't tell from the photos that we were never more than 500 feet from the suburbs.

Of course, I am like an elephant when it comes to the trails. Well, maybe not quite an elephant, as an elephant would be able to just smash its way through stuff. I'm more like, you know, something clutzy and awkward. 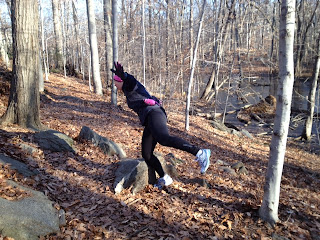 Illana is faking falling, but I'll bet you were fooled, weren't you, you totally couldn't tell that this was staged, can you!

It was only about 90 minutes into our 2+ hour run that she took the lead. Immediately I noticed her style - she jumped gracefully from stone to stone, seeming to float or bounce. "Be nimble!" she told me. "Nimble!" I tried it. It worked. (Relatively speaking. I went from elephant to maybe hippopotamus - which I'm good with.)
Posted by T at 1:20 PM